Facebook Twitter LinkedIn Email Sina weibo QQ QQ Zone WeChat Copy this link
Steel plants are supposed to be dirty, dusty and devoid of color, right? Perhaps with a few scruffy shrubs in the factory’s mandatory ‘Green Belt’? What amazed the group of 37 foreign and Chinese visitors when they strolled into the worksite of Nanjing Iron & Steel Co (NISCO) on March 29 in East China’s Nanjing, therefore, was nothing about steel at all, but all the beautiful blossoms and the peach trees bordering roads within the works and in gardens around facilities sheds. 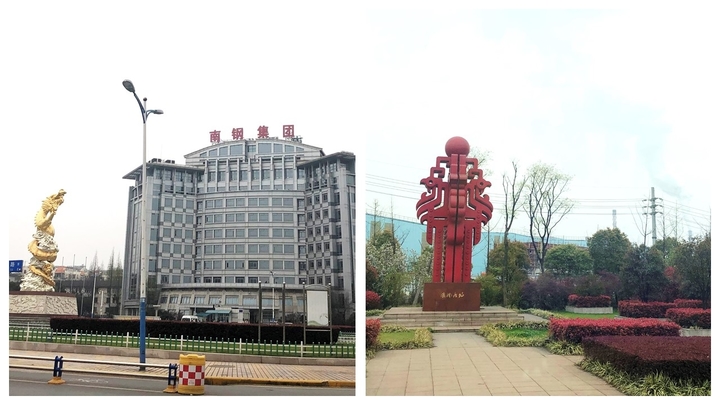 “The plant here is so clean,” exclaimed a Russian steel company official who was among the delegates at the 17th International Steel Market and Trade Conference hosted in Nanjing over March 27-29.

Prior to the visit, he had been proud that his steel mill – like NISCO – had attempted to keep dust to a minimum by ensuring that raw materials are transported via a lot of pipes and covered conveyor belts. “There is no way you would see so many trees and flowers in any of Russian steel mills,” he admitted to Mysteel Global as he gazed upon one of NISCO’s many miniature gardens dotting at the works.

After touring the cavernous No.4 blast furnace plant and surveying NISCO’s wide plate mill, the white floral blouse I was wearing for this particular plant tour – no sneaky test, really just pure coincidence – is concrete proof that this steel mill is indeed dust-free. Not just the air either. I walked the whole tour in my high heels (my fault for being lazy and ill-prepared, I know) but the plant turned out to be 100% walkable. No side-stepping dangerous shards of return scrap or gingerly tip-toeing over spilt flux powder.

Some visitors were rather disappointed that they did not see a drop of molten iron when we walked into the No. 4 blast furnace enclosure: all they saw of the magic of iron-making – including the conveyor that was feeding the iron ore into the blast furnace and red sizzling hot metal – was on the screens of the central control centre where workers were sitting comfortably in office chairs, watching closely all the numbers on the monitors in front of them.

There was, therefore, much oohing and aahhing when the shimmering bright-coloured red-hot slabs were being propelled with noise and forced through the rolling machines (a reversable plate mill supplied by SMS Siemens). The more energetic among the visitors even chased the slab from their vantage point along the overpass above the rolling machines. They watched as the glowing red block travelled through the rolling stands that pummelled it into a wider and thinner plate until the steel was a cool and dull grey colour at the end of the process, like a beast beaten into submission.

Located about an hour’s drive from the city area, NISCO operates five blast furnaces at its works, with two being 1,800 cu m (including the No.4 we inspected), another two at 2,000 cu m and one at 2,500 cu m. The steelmaker has also installed three 150-tonne, three 100-tonne converters, and a 100-tonne electric arc furnace.

NISCO offers a mix of flat rolled and long products but has been producing primarily higher-end products such as wide and heavy plates, and rebar.

The 5,000mm wide plate mill commissioned in 2013 has been operating at a 1.35 million tonnes/year capacity. Of the plates produced, about 20% are ship plates, 10% for oil and gas pipes, and the balance for oil and gas storage containers, boilers, bridges, and structures for power generation houses.

On the wall along the raised walkway that overlooks the 5,000mm wide plate mill are pictures proudly recording all of the mill’s core achievements, including providing plate used at some construction projects in the Arctic that can retain its properties of strength and hardness even at minus 50 degrees Celsius.

A couple of years ago in a phone conversation I had with a NISCO plate export official, he grumbled about the difficulty he’d had securing permission for exports, saying that internal approval would only be granted if the deals were proven to be higher-priced than domestic sales and if the market had good potential of long-time supply.

“We are basically fighting with our domestic sales colleagues on a case-by-case basis for the tonnage, and we can only win the deal if the boss is convinced it is a good sale at the right price and in the right market,” he said.

That is probably the core reason why NISCO – even in the years of investment frenzy in the early 2000s – has not spent lavishly to simply grow its size. Instead, the steel mill, with its 10 million t/y crude steel capacity, has established a company image in the market that links its name to quality.

Amid the overall revival in the global steel market, NISCO has managed to increase its exports too, selling 380,000 tonnes of steel abroad during 2018, compared with the 270,000 tonnes for 2017, and this year, it aims to increase the tonnage by another 25%, according to Li Xinliang, the head of NISCO’s exports department. Moreover, across all exports, high-end products will stay as the dominant majority, just as in 2018 when “90% were high-end products”, he emphasized when speaking at the conference.

Along the way, when my colleague and I were blubbing excitedly about the cleanness of the works and the beauty of its gardens, a delegate who had seen many more Chinese steel plants appeared rather jaded by our exuberance.

“NISCO is not the cleanest. You have no idea how neat and tidy a Chinese steel mill can be nowadays,” he remarked with a rather bemused look on his face, like a seasoned city slicker gently correcting ‘country mice’. Well, country mouse I am if it means that all Chinese steel mills are on their way towards competing with one another to excel as the most beautiful, eco-friendly producer of steel in China and across the world.

You never know, maybe five years from now, Chinese travel agencies will be offering tour packages to Baowu’s sprawling Wuhan works, to Jiangsu Shagang’s impressive Zhangjiagang factory or to Hebei Iron & Steel’s Serbian plant in Europe. For their part, the hosting steel mills will surely add another lucrative profit-making channel to support their business, and no one will link steel with dirt and dust anymore.

The NISCO visit surely has changed my perspective.