Facebook Twitter LinkedIn Email Sina weibo QQ QQ Zone WeChat Copy this link
Steel capacity in the six major ASEAN countries is projected to reach 144.2 million tonnes/year in the next three to five years should all the integrated mills under planning come on stream as planned, Yeoh Wee Jin from the South East Asia Iron and Steel Institute (SEAISI) shared at the 2019 ASEAN Iron & Steel Sustainability Forum in Jakarta of Indonesia on November 25.

This would mean that the ASEAN-6 comprise Singapore, Vietnam, Indonesia, Philippines, Thailand and Malaysia would add on 60.5 million t/y of steel capacity to their existing capacities, he said, adding that most of the new capacity would be carbon steel through either expansions to existing steel mills in ASEAN or new projects, and most of the investments are from Chinese steel mills.

For example, Yeoh cited a 10 million t/y carbon steel project at Sarawak’s Samalaju Industrial Park in East Malaysia planned by Wen’an Iron & Steel Co, a steelmaker in Wu’an city of Hebei province that is set for commissioning in 2021 or 2022, and HBIS SteelAsia, a joint venture between the Philippines’ largest steelmaker-SteelAsia Manufacturing Co and China’s HBIS Group, which plans an 8 million t/y integrated works in Misamis Oriental in the southern Philippines, with Stage 1 to be completed by 2023.

(All the proposed projects from Yeoh's presentation)

As for stainless steel, Yeoh noted that leading Chinese stainless steel producer Tsingshan Group, has invested in new facilities at the Morowali Industrial Park in Indonesia since 2015. By last year, all of the projects – including 2 million t/y nickel pig iron capacity, 3 million t/y of stainless steel slabs, 600,000 t/y of ferrochrome and 1 million t/y of carbon steel capacity – had been commissioned, as Mysteel Global reported.

If all the new steel capacity is added as planned, Yeoh estimated that at the present rate of growth in steel consumption across the ASEAN region, steel consumption will catch up the potential installed capacity between 18.6 and 20.1 years, adding that his new capacity forecast does not factor-in the addition of new electric arc-furnace-based steel projects set for the region.

At present, however, there is already of an oversupply for long steel products facilities in ASEAN, a surplus that is likely to be intensified with the commissioning of these new investments, Yeoh pointed out. “Long products capacity is way above consumption levels…Local supply is sufficient for current market levels,” he said.

In 2018, ASEAN-6’s long steel consumption approached 40 million tonnes while the capacity was above 60 million t/y, although actual long steel production in the region was only above 30 million tonnes, according to graphs presented by Yeoh.

Flat steel products, on the other hand, are mostly served by imports, and hence, there appears to be room for new capacities, Yeoh stated, noting that flat steel capacity in ASEAN is nearly catching up with its annual apparent consumption, which stood at around 30 million tonnes in 2018, he told delegates.

In 2018, ASEAN-6’s steel consumption totaled 80 million tonnes, up 5% on year, while the domestic production only amounted to 43 million tonnes, and their steelmaking capacity utilization only reached 57.6% for 2018, according to the SEAISI statistics.

The steel demand growth rate in 2019 is predicted to be around 4% year-on-year, according to Yeoh. (from Yeoh's presentation) 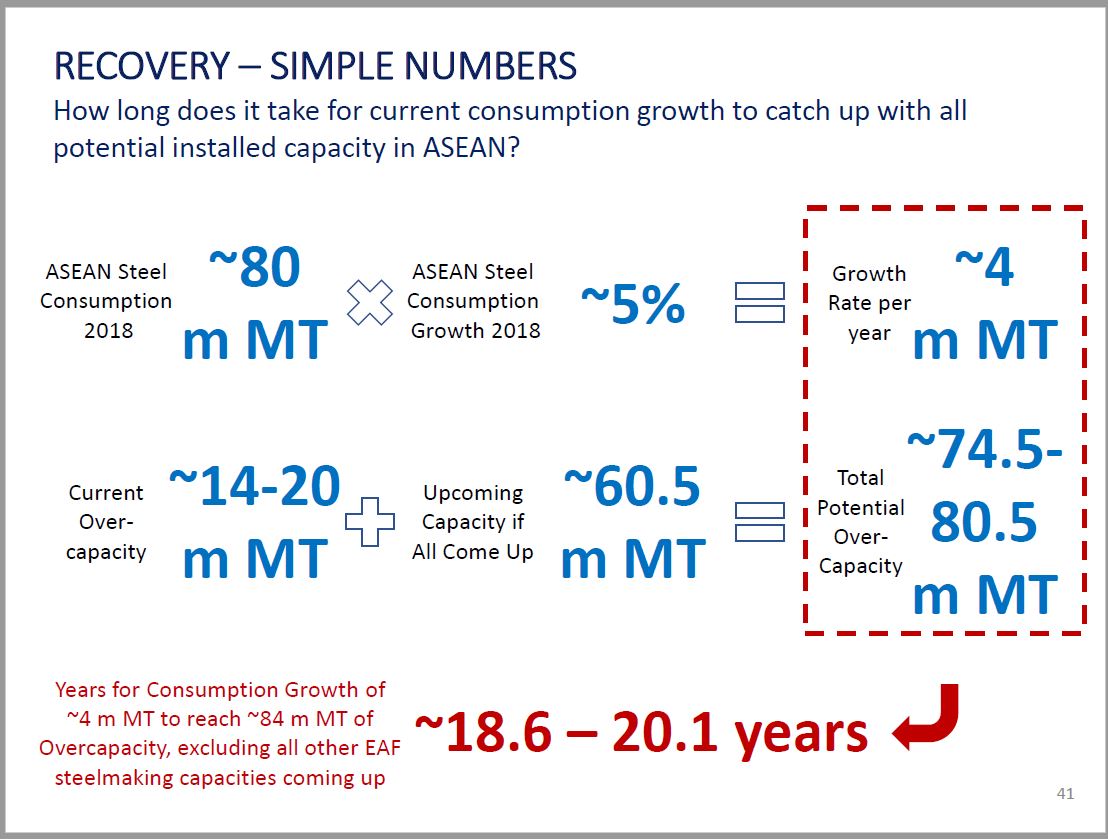