Facebook Twitter LinkedIn Email Sina weibo QQ QQ Zone WeChat Copy this link
China, the world’s top one steelmaking and iron ore consuming country, was at the epicenter of all the drama unfolded in the iron ore market in 2019 when the seaborne price shot up and stayed at the three-digit level for some months mainly because of the global iron ore supplies with Vale’s dam accident in late January and then the cyclone that hit Pilbara, Western Australia, in late March.

Will the history repeat itself or will now be the turn for the Chinese steel mills to be at the centre of the stage for 2020?

China’s crude steel output, with over 90% contributed by blast furnaces, grew 8.3% on year to 996 million tonnes, which shocked the world as well as the Chinese market, though market participants noted that Beijing had been strongly promoting investments in infrastructure construction and the property market fared surprisingly well despite the central government’s reiteration that properties were not for investments.

Despite a 8.3% year-on-year growth in steel output and all the concerns on global iron ore supply, China’s iron ore imports only grew 0.5% on year to 1.07 billion tonnes for 2019, and even in the commonly-agreed best-ever 2018, China’s iron ore imports posted its first-year ever annual decline albeit 1% on year, which are really interesting facts to look at in understanding where China’s imported iron ore market will go for 2020 and years ahead.

Something in common for both 2018 and 2019 but different from the previous years was that the availability of scrap to China’s steel mills both for electric-arc-furnace (EAF) and blast-furnace (BF) producers has increased substantially with the elimination of induction furnaces by mid-2017.

No one knew for certain how big the steelmaking from the induction furnaces, though the common estimation bet on 120-140 million tonnes/year, and their removal had freed up all the scrap to the legitimate EAF and BF producers in the past two years, more so for the BF producers that accounting for over 90% of China’s crude steel capacities.

BF producers had been feeding scrap not only to its BFs but also to converters to maximize the steel output when the steel margins were attractive or when Beijing had been stepping hard down on the polluting industries and tackling facilities in the steel industry including sintering, coking, and blast furnaces in 2018 and 2019.

“We have been trying our best to produce more, as it has been a while to see the domestic iron ore concentrate price at Yuan 800-900/t or even over Yuan 1,000/dmt for a while,” an official from an iron ore mining company in Northeast China commented back in 2019.

China’s steel output ran high over April-August, when the market was still consistently trying to understand the real situation when iron ore supplies from Australia and Brazil did slip, so the timing was perfect for the iron ore price to attempt new highs when no definite conclusion could be drawn.

The China Iron & Steel Association (CISA), the representative of China’s steel mills, stepped in in early July, voicing out its concern on the burden the rising iron ore prices imposed on the Chinese steel mill, and reminded the domestic steel mills and iron ore market participants that there would not be any iron ore shortage in the market even with Vale’s accident and the Australian cyclone, and the global iron ore was with oversupply, not undersupply, in general.

Besides, CISA disclosed that it would lobby the government to investigate in any manipulation in iron ore trading and to penalizing those illegitimate or manipulative acts. Immediately afterwards, China’s 62% seaborne iron ore price fell sharply from its nearly 5.5-year high of $127.15/dmt on July 3 to $81.25/dmt on August 28, both in terms of CFR Qingdao.

It remained a myth as to what caused the iron ore price decline, the change in the market fundamentals or the departure of speculators on the warning, as coincidentally around the period, China’s national HRB400 20mm dia rebar benchmark price also declined by Yuan 405/tonne or 10% to Yuan 3,736/t including the 13% VAT as of August 28 when the robust domestic steel demand seemed to have ebbed. 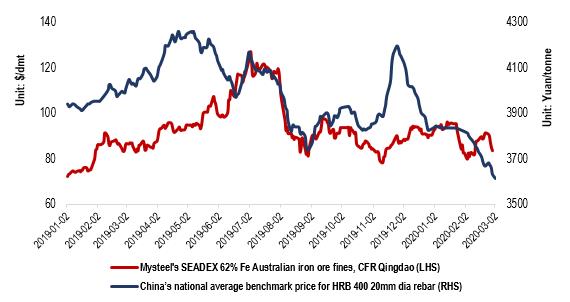 Amid the price volatility, China’s iron ore inventories at 45 ports across the country fell to around 114 million tonnes as of July 11 from the year’s high of 148.4 million tonnes on April 4, as fewer traders dare to bet on prices, and Chinese steel mills felt more economical and safer to consume portside iron ore in small volumes than to book new seaborne iron ore shipments.

For 2020, so far it seems that all the top four iron ore miners will be raising their production or shipments for their 2020 either in calendar year or in fiscal year (July 2019-June 2020), according to their latest reports, with the biggest contributor being Vale, expecting its iron ore fines production to recover to 340-355 million tonnes from 302 million tonnes for 2019.

Vale will not put all the added 40-50 million tonnes into the market, though, as it needs to refill the inventories at each and every chain along its operations, which already proved crucial for the iron ore mining to achieve a sustainable business and to reduce the market impact to the minimal amid an accident.

Besides, the Chinese authorities will more closely monitor all the economic sectors including the ferrous community to make sure that they will not suffer more than they have too after the already tormenting first three months of 2020 because of the unfortunate outbreak of novel coronavirus disease (COVID-19), Mysteel Global understands from the market.So far in the first quarter, the 62% seaborne iron ore price had been holding well, hovering $79-97/dmt despite the dismal demand from the Chinese steel mills because of the Chinese New Year holiday in late January an then the virus outbreak, mainly thanks to heavy rainfalls in Brazil and the Tropical Cyclone Damian that hit Pilbara, both of which curtailed iron ore shipments from these two core supply countries.

Even prior to the virus outbreak, Lv Guixin, a senior official from the Raw Material Dept of China’s Ministry of Industry and Information Technology (MIIT) already disclosed in late 2019 that the ministry would closely watch the imported iron ore prices in 2020 to safeguard the normal order in the Chinese steel market, and it would help to enhance transparency in the iron ore trading and to strengthen China’s pricing power in the seaborne iron ore market.