Facebook Twitter LinkedIn Email Sina weibo QQ QQ Zone WeChat Copy this link
China’s imported iron ore prices in both the spot and futures markets have been rather volatile since February 3, the supposedly first working day after the lengthy Chinese New Year holiday, and the fluctuation may probably continue in the near term with the mix of positive and negative signals making it hard for investors to agree on the market trend, market sources shared over March 4-6. (Est. reading time: 6 min)
China’s iron ore market fundamentals have been rather intact, as reduced demand has been balanced out by lower supply in the first quarter so far, and some positive signs have also emerged in Chinese steel markets with many industrial sectors in the country other than in Hubei having reopened for operations especially since the last week of February.

The global economy, the bigger context for the iron ore market, however, has been with more uncertainties when as of March 8, there had been 105,586 confirmed novel coronavirus disease (COVID-19) cases, with 80,859 in China and the balanced shared among the other 101 countries, territories, and areas, according to the latest situation report from the World Health Organization.

Iron ore, as a bulk commodity that has both the physical and derivatives characteristics, saw the two forces take turns in leading the price movements. 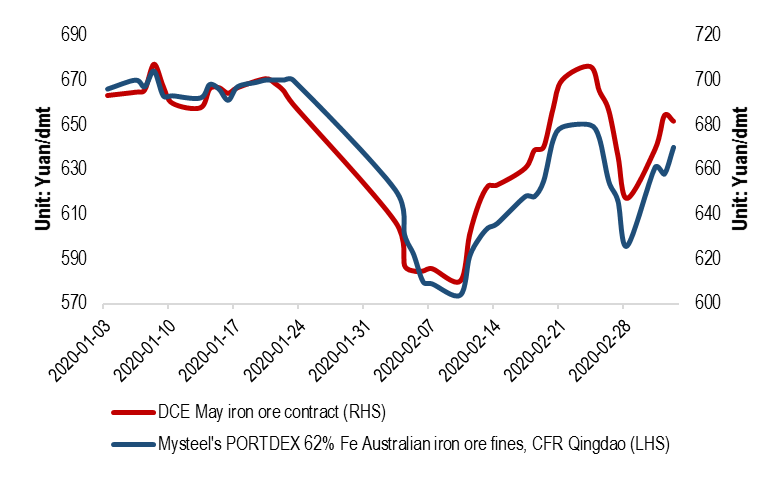 It is hard to tell the cause and effect between the futures and physical iron ore prices, nor has it been possible to pinpoint a well-agreed reason for the declines or inclines in a particular day, market sources agreed.

“I do not think anyone has a clear idea what triggered price movements, and what to expect for a particular day,” a Beijing-based trader for both physical and paper trading of iron ore shared.

“Sometimes we heard about economic stimulating measures released by China, yet the prices declined for that particular day, and when we thought further surges in steel inventories both at the traders and mills were bad news, both physical and futures prices in the iron ore market rebounded,” he added, admitting involving in both the markets should be the best option for now.

“Gambling on one market is not safe, while participating in both paper and physical markets should be able to minimise my risks,” he said.

Market divided on the prospect amid all the uncertainties

Iron ore prices have been fluctuating rather frequently and a bit dramatically recently, acknowledged an iron ore trader from Fujian province in Southeast China, though he appeared rather optimistic about the market prospect.

“Two slumps in the past month were both trigged by the market panic about the impact of COVID-19 on the steel sector, but both rebounded soon afterwards, supported by the still relatively positive fundamentals in the iron ore market,” he observed, adding that many indicators such as imported port inventories, daily discharge rates at Chinese ports, steel mills’ in-house stocks and daily iron ore trading volume were all supportive to iron ore prices.

“Many Chinese steel mills have been buying though in small quantities and mainly from ports, indicating that their internal stocks have indeed been running low, and this will be a key supportive variable,” he said, disclosing that his iron ore trading had been stable recently.

Imported iron ore sintering fines at the 64 Chinese steel mills under Mysteel’s bi-weekly survey had declined for the sixth stright week over February 27-March 4, slumping to 15.1 million tonnes as of March 4, a three-and-half-month low, and the imported iron ore stocks at China’s 45 ports dipped for the fourth consecutive week over February 28-March 5 to a new low of 120.8 million tonnes since September 27 2019, according to Mysteel’s data.

The Fujian trader admitted, though, that it remained hard to foresee the longer-term market outlook with the unknown in the further development of the virus outbreak globally.

A Shanghai-based iron ore analyst, however, maintained that the chances for any sustainable rises in iron ore prices would be limited, reasoning that China had been burdened with record-high steel inventories both at the traders and steel mills, which will delay any substantial demand for iron ore if there is any.

As of March 5, stocks of five major finished steel products, comprising rebar, wire rod, hot rolled coil, cold rolled coil and medium plate at 184 steel mills nationwide and the traders in 35 Chinese cities totalled 38.8 million tonnes, a record high since Mysteel conducted this survey in May 2015 after having climbed up since mid-December 2019, according to Mysteel’s data.

Besides, “Iron ore shipments from Australia and Brazil have been recovering from the impact of the adverse weather in the past couple of weeks, and China’s domestic iron ore supply will probably increase in March,” he noted.

Australian iron ore shipment had been disrupted by the Tropical Cyclone Damien and the Brazilian tonnage had been jeopardized by heavy rainfalls in January and early February.

At the same time, some of the Chinese steel mills have or have planned to bring forward maintenance on their facilities while others may restart their facilities after the maintenance last month, which may lead to an overall steady demand for iron ore and a possible faster recovery in supply than demand.

“Iron ore prices, thus, may find it hard to be either on an upturn or a downturn, and instead, may continue to fluctuate in March,” he concluded.

Chinese steel mills, as the end-users, are in general cautious in replenishing iron ore for the time being both for uncertainties in domestic steel market and the constraint in cash flow, Mysteel Global noted.

“It is a hard time for us to strategically buy iron ore now, as the market is changing all the time, ups and downs non-stops, and to minimize cost risk, we’d prefer to slow down iron ore procurement pace and wait until the market direction is clearer,” an iron ore procurement official from a steel mill in Shaanxi in Northwest China remarked, confirming that the mill had been in normal production.

Dark clouds to hover over steel market and economies

It is concerning to the Chinese steel mills that until March 6, there had been little consolation in China’s domestic steel prices yet, and the Mysteel’s national average price for HRB400 20mm dia rebar, for example, still hovered at its 34-month low of Yuan 3,600 as of March 6 despite that there has been a consensus that domestic steel demand may see sustainable recovery starting mid- or late March, and this has weighed heavily on the ferrous market sentiment, seriously dampening the steel producers’ enthusiasm in procuring iron ore for their future needs. 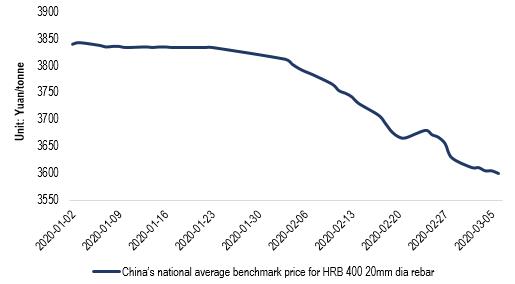 In the bigger context, though, there is a huge question mark regarding the whole global economy for 2020, and different from the previous financial crisis in 2008, China has been hit hard and the first by the COVID-19, making it unlikely for the world’s second largest economic body and the world’s top steel mill to help cushion the anticipated slow-down in global economy and steel output for 2020.

In consideration of the COVID-19 impact, the Organisation for Economic Co-operation and Development (OECD) updated its 2020 projection on economic growths for the world and many countries on March 2.