BLOG: Iron ore prices amaze or annoy many for 2020

Facebook Twitter LinkedIn Email Sina weibo QQ QQ Zone WeChat Copy this link
Nowadays, when I am counting my blessings, I will put one in the daily list, which is that I have never ever thought of testing my market understanding by trading iron ore in the physical or paper markets myself despite having been closely monitoring the market since 2004.

How lucky am I to stay away from the market especially in the past month or so when even the veteran traders may find it a little amazed or annoyed by the current market situation (depending on what positions they were holding when the price tumbled or surged). Besides, the recent “irrational” price volatilities have undoubtedly caught many market participants by surprise.

“It is not making sense. When I saw China’s steel inventories surged to yet another record high, hitting about 39 million tonnes, I thought the iron ore price should come down, but it went up,” a Singapore-based iron ore trader grumbled on March 5.

To me, 2020 is the first time iron ore has shown two sides of its characteristics clearly - a fundamental industrial good and at the same time, a hedging tool in the ferrous community. As far as I can recall, from my 16 years of experience in iron ore market coverage, this is the first year the global iron ore market had to react to the disruptions in demand and supply or to the overall uncertainties in the global economy, including China, although it is hard to predict which would have the upper hand.

The situation now is way more complicated than in 2008 when the financial crisis hit. Back then, when the rest of the world went through a troubling time and recession, China had managed to delay the inevitable with a Yuan 4 trillion ($577 billion) economic stimulus package. As a result of this, iron ore price had thus, avoided a hard crash back then.

Instead, the iron ore market, riding on the benefit of a booming demand from China, enjoyed a few robust years until the support of the stimulus from the national economy waned. Together with China’s steel industry, the iron ore market slumped into the dark days around 2012-2015.

2020, however, had been unprecedented in past two decades for the iron ore market. As the world’s largest consumer of steelmaking materials, China had been posed with great economic uncertainties when the novel coronavirus disease (COVID-19) broke out nationwide in late January, and it is still in the midst of fighting the virus.

It has never happened before, either, that the world’s second largest economic body had to put its economy at a standstill for almost a month to concentrate on bringing the infectious disease under control over late January-late February.

When China had barely taken a breath from the long and hard battle against the virus after a month or so, confirmed cases began to emerge one after another in other countries around the world. By March 8, there had been 105,586 confirmed COVID-19 cases worldwide, with 80,859 in China and the balance in the other 101 countries, territories, and areas, according to the latest report from the World Health Organization (WHO). 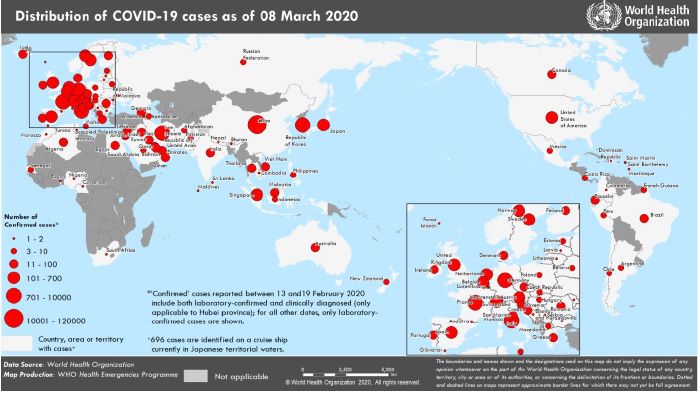 The rapid spreading had sent many countries into a state of panic and the global economy is in an even deeper unknown. Both China and the world are bracing themselves for a hard blow on the GDP growths in the first quarter of the year, and probably for the rest of the year as well, as the virus seemed far from being under the control even with all the positive signs in China.

With all the complexities in the economic circumstances and fundamentals, it is of no surprise that iron ore, like many other commodities with oil prices leading the way, sees its prices yoyoing in response to either macro-economic news or to the swings in fundamentals.

A comment from a Beijing iron ore trader was very spot on, as he, just as me, found it hard to explain the recent iron ore price movements, even though he has traded iron ore for nearly twenty years.

“Many traders have been trying to make sense of the recent ups and downs in prices and trying to justify the price movements with a particular trigger but I don’t think that’s possible anymore with the mix of all the complexities. I think the best way is to pair physical with paper trading to manage iron ore pricing risks,” he remarked honestly.

For 2020, many traders may at least be thankful that there are iron ore derivatives priced in Yuan or the U.S. dollar as hedging or speculative tools for them to manage their exposure to price volatility for now and for the rest of the year, or at least until the uncertainties caused by the virus are cleared.