Facebook Twitter LinkedIn Email Sina weibo QQ QQ Zone WeChat Copy this link
So far this month, rarely has a day gone by that Shagang Group (Shagang), China’s largest electric-arc-furnace (EAF) steelmaker, has not announced yet another reduction to its steel scrap procurement prices. So far, the mill has squeezed prices by total of Yuan 270-280/tonne ($38.3-39.8/t) depending on grade, and April is barely a week old. Market sources cite softening finished steel prices to explain its repeated price cuts, and that steel demand is below expectations.

As of April 8, Shagang, headquartered in Zhangjiagang city in East China’s Jiangsu province, has trimmed its scrap procurement prices no fewer than six times so far this month. After the April 8 adjustment – by another Yuan 50/t – Shagang is now paying Yuan 2,280/t for domestically-sourced HMS 80:20 scrap in terms of delivery to its mill and including the 13% VAT.


“This round of price cuts is more related to finished steel demand rather than production costs,” a Shanghai-based steel analyst said. “EAF-steelmakers in East China are earning a profit of some Yuan 200/t on their rebars currently, a marked improvement on the less-than-Yuan 100/t margin witnessed last week,” she added.

An official with another Jiangsu EAF-steelmaker agreed that costs are the key. “Our purchasing prices for steel scrap basically rely on our finished steel sales, and currently these sales are not as robust,” he explained. This steelmaker has lowered its scrap procurement prices four times starting this month by a total of Yuan 120/t.

Currently, domestic steel demand is better than that in the first two months of 2020 because the demand recovery has been delayed this year, but it is not as strong as the market had expected, according to him.The declines in finished steel prices and demand below expectations have directly weighed on steel scrap prices, Mysteel Global notes.

In parallel, Mysteel’s national average price for HRB400 20mm dia rebar benchmark has stayed low at Yuan 3,592/t including the VAT as of April 7 though it had slightly recovered from the 35-month low recorded on April 2 of Yuan 3,578/t. 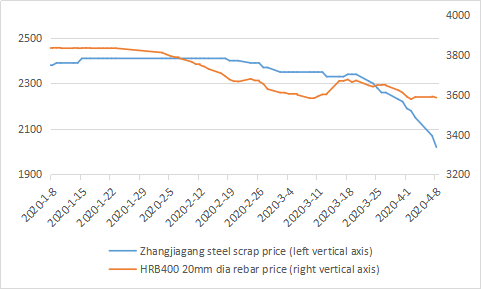 The Jiangsu-based mill source believes steel scrap prices still have space to decline further as mills are receiving sufficient scrap supplies at a time when demand for their finished steel seems mediocre.

“Most scrap dealers are rushing to find buyers for their inventory amid the decline in steel scrap prices as it’s generally accepted that scrap prices will slip further. Only a few dealers who collected scrap when prices were higher are holding off selling, waiting for prices to recover,” he added.

But they could be in for a long wait, seeing as how finished steel prices seem to be struggling. A Central China-based steel trader was comparatively negative when asked about steel prices in the near term. “The high levels of stocks (at mills and traders yards) keep exerting pressure on the market, and the uncertainties due to the COVID-19 situation worldwide weigh on sentiment too,” he said, adding that the weak finished steel prices would surely dampen prices of raw materials.

Total stocks of the five major finished steel products held by the 184 steelmakers across China which Mysteel monitors continued to trend downward for a fourth straight week over March 26-April 1 to reach 10.2 million tonnes, with the week-on-week slide of 6.1% being only slightly slower than the 6.8% drop recorded over the prior survey period. Moreover, stock levels have more than doubled over the past 12 months, given that as of April 4 2019, inventories totalled just 4.9 million tonnes.

However, the high levels of steel stocks have failed to restrain steel production. Daily crude steel production in China grew at a faster pace during the last eleven days of March, rising by another 125,100 tonnes/day or 5% from the March 11-20 period to average 2.62 million t/d over March 21-31, according to Mysteel's survey among 247 blast-furnace and 71 electric-arc-furnace steel producers.

The Shanghai-based steel analyst expressed concern that steel production from EAF mills would very likely increase in the short run given that improvement in profit margins the mini mills are enjoying.

The high levels of finished steel stocks and swelling steel production are already dampening prices of raw materials, and not just those of scrap being paid by mills such as Shagang, Mysteel Global noted. For example, as of April 7 Mysteel’s composite merchant coke price across China softened to a 33-month low of Yuan 1,659.2/t including the 13% VAT, Mysteel’s data showed. And just like the scrap dealers, over the past several weeks China’s merchant coke producers have had to bow to repeated demands from steelmakers that they accept lower bid prices for their coke, as reported. Since early March, merchant coke prices have fallen by a total of Yuan 200/t, Mysteel notes.