Facebook Twitter LinkedIn Email Sina weibo QQ QQ Zone WeChat Copy this link
China’s “two sessions” in 2020 are of even greater significance than the previous years, as the top two political sessions to start on May 21 and May 22, will not only finalize the country’s series of development tasks including economic growth for this year but will also pan out the 14th five-year (2021-2025) planning period strategy, and many industries including steel are expecting more stimulus measures from Beijing to combat against the impact of the COVID-19.

The “two sessions” or “Lianghui” in Chinese are referring to the annual sessions of the National Committee of Chinese People's Political Consultative Conference (CPPCC) and National People's Congress (NPC), usually held in early March and attended by all the central government officials and provincial governors. They have been postponed by over two months until late May because of the pandemic.

With a 6.8% on-year decline in China’s economy, first time ever in record of the National Bureau of Statistics since it released quarterly economic growth data in 1992, Beijing has not waited for the “two sessions” but has rolled out a series of measures to rescue the national economy, and the top two political meetings will only release more packages along the line including more spending from the government and the further relaxation in loan issuance, ferrous market sources expect.

“The hardest fight against COVID-19 inside China is almost over, it is time to hurry up and make up for the losses the pandemic has brought to the economy,” a Shanghai-based steel analyst commented, anticipating a seriously big fiscal stimulus package to be announced at the two sessions.

“Many stimuli have already been introduced, but there must be something new and something even bigger,” a source from North China’s Hebei province said confidently.

It has become a routine that a number of ferrous enterprises such as steel mills, coking plants, and coal and iron ore mining operations will be restricted of operations by various degrees around when the “Two Sessions” are held, simply to minimize any mass accidents or safety concerns during the top political meetings.

For 2020, ferrous enterprises may have even less to complain about as all the restrictive measures so far have not been as severe and disruptive, according to market sources.

China’s iron ore mining companies including those in Hebei province that borders Beijing on three sides and thus usually imposed even more stringent curbings, have not received any notices from their respective local authorities to temporarily halt the use of explosives as of May 20, the day before the start of “two sessions”.

“We have been producing concentrates as per normal so far, and our local government has not stopped distributing explosive or asked us to suspend mining for this year’s meetings,” confirmed an official from a Tangshan-headquartered mining company in Hebei.

An official from a mining company in East China’s Shandong province confirmed the same, analyzing, “it seems that the local authority may not adopt the same practice as previous years, and they need to encourage all industrial enterprises including steel and mining to keep operating to help recover the economy.”

Coal mining industry, however, has not been exempted.

“Our group company has kicked off a round of thorough safety checks on our operations including mines and wash plants since mid-May,” disclosed an official from a large-sized coking coal mining company in Shanxi of North China.

“Just the same as previous years, similar checks have always been conducted ahead of the ‘two sessions’, but our coal delivery has not been affected,” he added. Shanxi in China’s largest coking coal mining province and is prone to coal mining accidents.

All coal mines in Northeast China’s Heilongjiang province have been halted for safety inspections over May 20-28 too, according to market sources, and a total of 1.3 million tonnes of raw coal production is expected to be affected for the period.

The disruption to coal mining, however, has not triggered any rush stocking up among the end-users such as coking plans and steel mills as their in-house stocks have been perching at high levels, according to market sources.

Beijing’s released stimuli have been steel-friendly

So far, China’s steel market has already benefited from the released measures, as Beijing has be committed to more funding in traditional and new infrastructure construction projects, as well as specific preferential policies to help out the auto and white goods industries, all of which will be consuming steel to different degrees.

Over January-April, China’s local authorities issued government bonds for all purposes totalling Yuan 1.9 trillion ($267 billion), or up 16.6% on year, according to data from China Central Depository & Clearing Co Ltd, a wholly state-owned financial institution under the regulation of the State Council of China.

To revive auto consumption, Beijing has extended the 10% consumption tax waiver as well as the subsidy on new energy vehicles (NEVs) purchase until the end of 2022,  though the subsidy will reduce proportionally over 2020-2022.

As for white goods, Beijing has called for the local authorities to work on an orderly used home appliance collection, separation and recycling system over 2020-2022 to promote sales of new models via trade-ins.

May, therefore, has been the most promising month so far this year for the Chinese steel market, as both domestic steel and steelmaking raw material prices have been strengthening after the comparatively dormant March and April.

Prices of China’s series of ferrous commodities prices, therefore, have been on the uptrend recently, which is due to both the support from the market fundamentals and and optimism towards to the “Two Sessions”, according to market sources. 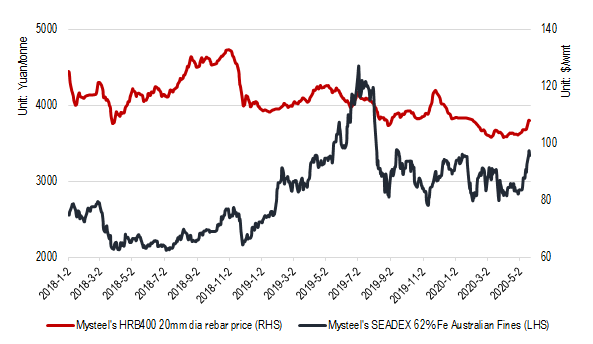 “Demand has certainly been improving this spring after the virus attack, but steel prices would not have surged so much recently if not for the convening of the ‘Two Sessions’, it (the prices) won’t move up so fast,” a Beijing-based industry source said. “All are betting on an even better market after the sessions with more stimulus efforts,” he added.

A second Beijing analyst agreed, expecting commercial and industrial activities will pick up further after the the “two sessions”, which will lend continuing support to the prices of both domestic steel and steelmaking raw materials, at least in the foreseeable future.

Over January-April, China’s crude steel output still grew 1.3% on year to 319.5 million tonnes despite all the adverse factors in the first quarter, though the growth eased greatly from the 8.3% on-year growth for 2019.