High steel output and stocks to persist in H2

The unsolvable uncertainties in demand will only lead to the rises in finished steel inventories on the zealous output, which will test the Chinese steel market resilience in the latter half of 2020, keeping the market participants always on their toes, Xu pointed out.

“Demand has been just back to the normality, while production has definitely been at full blast, and the balance will be the decisive factor for China’s steel price movement,” a senior official from a steel mill in Northeast China’s Liaoning province shared the worry.

As of June 4, the blast furnace capacity utilization among the 247 Chinese steel mills had surged to 91.9%, having climbed for twelve consecutive weeks or way above the widely-acknowledged sustainable and healthy 80-85%, according to Mysteel’s survey.

“This is a multi-year high and almost at the full capacity in essence,” an official from a steel mill in East China’s Shandong province commented, admitted that his mill’s daily finished steel output rose too, reaching 70,000 tonnes/day by the end of May from 52,000 tonnes/day a month ago.

It is rather concerning that Chinese steel mills have so far ignored the fact that the existing finished steel inventories in China are far higher than a year ago even with the steady declines since mid-March, according to Mysteel’s related surveys.

As of June 4, stocks of five major finished steel products including rebar, wire rod, medium plate, hot-rolled coil, cold-rolled coil, in the commercial warehouses in China’s 35 cities were 43.3% higher on year at 14.9 million tonnes, and the volume at the 184 Chinese steel mills totalled 5.7 million tonnes, or 23.6% higher on year even after twelve and 13 consecutive weeks of reduction respectively. 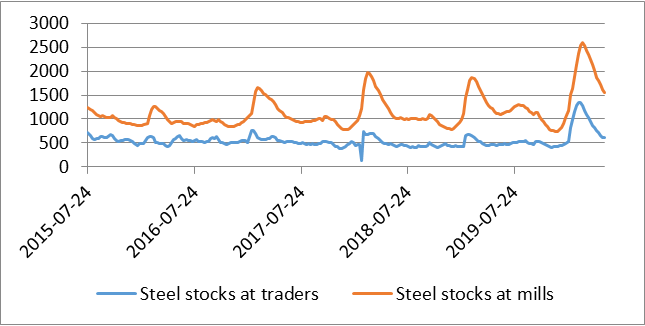 Nevertheless, “(rebar and wire rod) output has recently reached their five-year highs, and may well grow further even though sales may come down in the rainy season,” a steel trader from East China’s Shandong province grumbled.

A Singapore-based iron ore trader shared the uneasy feeling too. “I can’t see any definite signs of steel demand increase in the long run even in China, to me it is more like sentiment driven and the make-up after the lost time in the first quarter. I am waiting for the balloon to burst. I feel it is just a matter of time,” she said.

For 2020, Chinese steel market sources are well aware that steel exports may not be a solution anymore to balance out the fundamentals, just as back in 2015.

China’s earlier escape from the virus simply because of being hit the first resulted in higher domestic steel prices than elsewhere in the world, and the less steel consumption outside China including the core export destinations such as EU and ASEAN countries because of the pandemic will fail to help digest much steel supply from China.

Besides, China’s steel exports have been losing the pricing competitiveness against supplies in the past many years and they look rather pale against the lower-priced supplies from India and Turkey, a Shanghai-based trader admitted. By the end of May, China’s B500B 18-25mm rebar, for example, was offered at $431/t FOB Shanghai port as against Turkey’s rebar offering at $420/t CFR Hong Kong.

On the contrary, China has been importing more steel products including semi-finished steel and HRC from outside including India, Xu noted, estimating China’s steel imports to total 20 million tonnes, or up substantially from last year’s 12.3 million tonnes.

Amid all the complexities in the fundamentals, the balloon may really take a bit longer to burst.

The support on China’s domestic steel prices from the rising steelmaking raw material costs in H2 may send a false positive signal to the steel market participants in and out of the country, which may lead to even higher steel output and delay the unavoidable but with even greater consequences, market sources noted.

Chinese steel mills have not made more money but less as the comparison has not included the rising costs in other steelmaking materials such as scrap, coke and ferroalloys, Mysteel Global noted.

Iron ore price, on the one hand, may not subside soon, as the market has been consistently at the mercy of speculation after speculation on supplies especially from Vale, as the world’s largest iron ore miner has yet fully recovered from the dam collapse in late January 2019 and its operations have also been challenged by the explosive spread of the COVID-19 in Brazil in 2020.

The ever-declining imported iron ore inventories at China’s 45 major ports to a new low since late October 2016 to 107.5 million tonnes as of June 5 also further fumed the market optimism on higher iron ore prices, even though Vale has confirmed on a few occasions not to further cut its iron ore fines production guidance from 310-330 million tonnes after the downward adjustment from 340-355 million tonnes in April when the pandemic impact had already been in consideration.

It has not helped to cool down the iron ore market much either even though until June 5 Vale had outright admitted more shipment to China in 2020 because of the waning demand from those steel mills in Europe and Japan.

“Many traders are still frantically ordering new shipments recently and at fixed prices,” the Singapore trader said, admitting that she had been careful with the booking since the iron ore price exceeded the $100/dmt CFR benchmark on May 29.

Crude steel output both for the whole world and China, however, will reduce sometime in 2020 if it has not emerged, according to Xu, estimating the global crude steel production to reduce by 14.6% on year to 1.58 billion tonnes, among which, China’s to fall by 4.6% on year to about 950 million tonnes, according to his rather pessimistic estimation.

“It is only a matter of time for the market to realize this, and the imported iron ore prices will then slump,” he commented. This, sooner than later, hopefully will help to cool down the frenzy in China’s steel market.