Facebook Twitter LinkedIn Email Sina weibo QQ QQ Zone WeChat Copy this link
After over 42 years of “opening up policy” execution since 1978, China has reignited its economic engine, trying to set up a new economic development model in Xiong’an New Area in North China’s Hebei province, just like the Shenzhen Special Economic Zone back in 1980, and the difference is that Xiong’an is not about trade, it is about eco-friendly and high-end industries and well-designed landscape with digitalization and artificial intelligence being the core elements.

Xiong’an, under the jurisdiction of Baoding of Hebei, is at the centre of a triangle linking Beijing, Tianjin and Shijiazhuang, capital of Hebei province, each within 100 km, and once built, Beijing will ease its overpopulation by relocating some non-core functions and businesses to this new area.

The Xiong’an New Area is incubated from the coherent and coordinated development in the Beijing-Tianjin-Hebei area initiated by Beijing in 2014, and it was formally named and established on April 1 2017. The construction works commenced in 2018 and will go in full swing in 2020.

The acceleration in speed in 2020 is to realize the new economic growth dream by 2035 as planned, and it is a golden opportunity to help stimulate the Chinese economy in a challenging time, and the build-up, undoubtedly, can’t do without steel as a solid framework for many buildings and facilities. 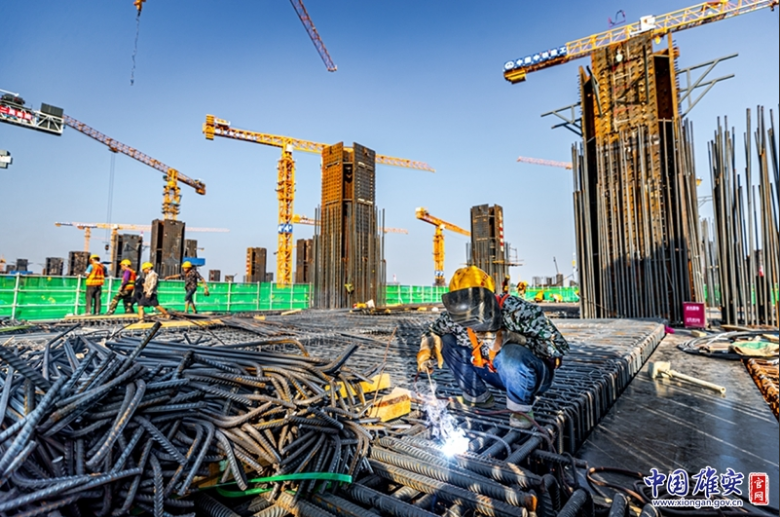 A construction site in Xiong’an

Steel demand from Xiong’an to burst in 2020

Construction in Xiong’an has been progressing slowly since 2018, as it has been focusing on the fine details of an ecological working and living environment including greenery planting, natural reserve protection and sewage control system, which has been heavily relying on smart landscaping than the large amount of steel, an official from a major building contractor for Xiong’an explained.

Steel demand, however, has been into a fast lane starting February this year as the construction has come to the very building, according to him. Indeed, many other related construction projects in Xiong’an have come to the stage of the main buildings.

The total steel consumption, thus, is estimated at 6 million tonnes for 2020, with some 4 million tonnes for the H2 of 2020, he estimated, explaining that residential housing will be needed to relocate the citizens in the Rongdong county of Xiong’an, and new residential buildings will break the ground in the Zangang district in the H2. “It is of little doubt that such a robust steel demand will last for the next three-five years,” he said.

Mysteel’s survey has confirmed the trend, noting that daily steel consumption in Xiong’an exceeded 7,000 tonnes/day in April, and the tonnage may double in the second half of this year after Rongdong started building the residential housing in May, and by then the demand will “surpass the combined steel demand from Beijing and Tianjin”, according to the survey.

Construction picks up in Xiong’an in post-virus stage

Xiong’an had not been troubled with any COVID-19 cases during January-February when the whole country had been fighting fiercely during the period with the harsh lock-down efforts, so the local ongoing projects had been progressing throughout the past few months even during the Chinese New Year holiday over January 23-February 2 as both workers and management personnel stayed on the site, an official from a local construction contractor confirmed. The company has been contracted to build the tunnels for road traffic, car parking and metro lines in the Rongdong residential areas.

Commencement of newly-launched projects, however, had been delayed by two months due to health and safety concerns during the virus outbreak, and “these projects are running 24 hours now, only stopped by rains or extremely hot weather when the temperature goes above 40 degrees Celsius to make up for the lost time,” he said.

“And for us, we need to spare no efforts to deliver the projects on time and we will only have eight months instead of the originally-planned 12 months,” he explained.

The company will only be able to launch their construction in July after the earthwork is done by another contractor, but the whole project is to be delivered before March 25 2021, which means that “we must complete the roofing by November… July-October will see much higher steel consumption than H1,” he said.

Another major construction contractor is with a similar timeline regarding its highway section project in Xiong’an.

“Installment of precast beam had been scheduled with one year, but now the duration has been shortened to 200 days by the virus,” a company official disclosed, estimating daily consumption of steel at around 300-1,000 tonnes/day and cement at 5,000 t/d,  according to him. For 2020, therefore, about 90% of the steel needed for this project will be consumed.

Xiong’an, fortunately, has been located in Hebei, China’s top steelmaking province, and the local steel mills, thus, have been benefited the most from all the construction works, among which are Jingye Group (Jingye) and Hebei Iron & Steel Group (HBIS), Mysteel Global understands.

As of now, a total of 14 projects are under construction in Xiong’an including seven tunnels, three highways and four new residential housing projects, and about 70% of the rebar to be consumed will be sourced from Jingye.


For the time being, Jingye, a 12 million tonnes/year steel mill in Hebei or with around 640,000 tonnes/month rebar output, has been sending around 10% of its monthly rebar production to Xiong’an, according to Mysteel’s survey.

A Jingye official added that the company has been in regular communication with the project contractors, receiving the steel orders one month in advance to fulfill the deliveries on time, and the total demand for rebar from the existing ongoing construction projcts may approximate 600,000 tonnes over June-October, according to his estimation.

Jingye has been prioritizing steel supply to Xiong’an projects, and it has been, thus, reducing sales to East China’s Shandong and Central China’s Henan, and when needed, it will further reduce steel sales in North China’s Shanxi, Shandong and Henan, instead of rushing out more steel output.

“Quality is crucial for all the Xiong’an projects, so we’d rather reduce sales to elsewhere than to produce more, making sure what we supply is of the best quality,” the company official explained.

Besides, transportation has been a bottleneck in trucking steel to Xiong’an, as the road has been so busy with all the deliveries with four lanes on both directions, according to him.

“I can foresee that how much steel to be consumed in the coming months by the new area may have little to do with demand, but more to do with how much can be hauled over,” he said.

Other than, Jingye, a core steel supplier especially for long steel, HBIS’s Tanggang in Tangshan city, Xuangang in Xuanhua city and Chenggang in Chengde city, all in Hebei, are all supplying all sorts of steel to the Xiong’an projects, a Beijing-based source close to HBIS steel subsidiaries confirmed.

Xiong’an is very much like the “City of the Future” in China, an illustration of how a city can be operating sustainably when economy does not have to be at the cost of environment and ecology, and the great daily life convenience can be achieved with all the 5G digital devices.