Facebook Twitter LinkedIn Email Sina weibo QQ QQ Zone WeChat Copy this link
Despite the COVID-19 wreaking havoc across much of China during the first half of 2020, steel enterprises had been steadily progressing with the 38 ongoing new steel projects including installing new steelmaking and rolling facilities, adding on environmental protection facilities and upgrading assorted technology, according to a Mysteel report checking on the status of ongoing projects by the end of H1. 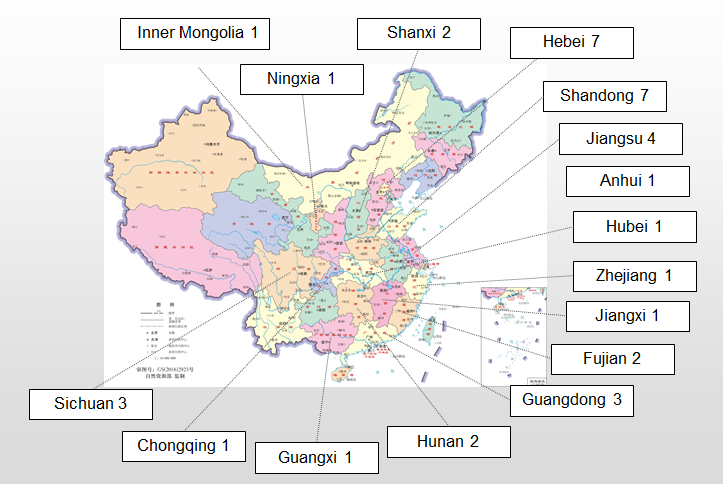 North China’s Hebei, the country’s largest steel-producing province contributing over 24% of total domestic crude steel output in 2019, is host most of the activity, supported by projects in East China’s Jiangsu and Shandong, the second- and fourth-largest producers which together contributed nearly 20% of total output last year.

In coastal areas, new steel projects will mainly be blast furnace-based, so as to enjoy logistics advantages for raw materials transportation. Currently, over 90% of China’s steel production remains BF based, using iron ore as the key raw material, of which over 80% still has to be imported, Mysteel Global notes.

Liuzhou Iron & Steel Group (Liugang) has just commissioned the first phase of its two-phase steel project in Fangchenggang, a coastal city in South China’s Guangdong province, which includes a 3,800 cu m blast furnace, as shown in the survey report. Liugang’s Fangchenggang project will eventually host three blast furnaces over 3,000 cu m in volume and have a steelmaking capacity of 8.5 million tonnes/year, as Mysteel Global reported.

In Southwest China, the steelmaking technology most mills employ remains mainly based on electric arc furnaces, as the region has abundant water resources harnessed for hydroelectricity generation and has a mature ferrous scrap collection, processing and distribution system, according to Chen.

This explains the fact that two of the three new projects in Southwest China’s Sichuan province are EAF-based, with one building a 100-tonne EAF and another installing a 75-tonne unit, Mysteel Global noted from the investigation report.

The new steel projects will not add to China’s total installed steel capacity but will increase the capacity utilization rate and result in higher steel output, market analysts agreed.

China strictly forbids the adding of new steel capacity, so almost all projects that involve the installation of new steel capacity also mandate the scrapping of existing (generally old and less efficient) facilities of at least the same volume. Liugang’s project is a notable exception to this rule, the expansion having been approved by the central government in 2012, long before Beijing’s “old-for-new” capacity swap policy for the steel industry was fine-tuned in January 2018.

“In principle, the total capacity volume will not increase; on the contrary, it will decline,” a Shanghai-based senior steel analyst maintained. “But by incorporating more advanced production techniques, the new facilities will ensure that utilization will improve, by a large degree,” he told Mysteel Global, a belief which other industry pundits shared.

“Many facilities that were used in capacity swaps were outdated,” Chen also said. “Many had long been idled or were running at very low utilization rates, while these new ones, with more advanced technologies and upgraded systems, are much more efficient in terms of production.”

These have clearly been reflected in China’s production data, another Shanghai-based source said. Over January-May this year, China’s crude steel output posted 1.9% growth on year to 412 million tonnes and in May alone, the output was at a monthly historical high of 92.3 million tonnes, as Mysteel Global reported. This is after China removed a total of 155 million tonnes/year iron and steel capacity over 2016-2018 during the supply-side reform.

Environmental protection, a matter of survival

Among the 38 projects, many involve the upgrading of facilities for environmental protection, Mysteel Global noted. Chinese steel mills had been striving to meet the stricter environmental requirements issued by Beijing in May 2019, identifying this task as “a matter of life and death”, according to market sources.

For the seven projects in Hebei, for example, three are related to the upgrading of sintering machines, given that sintering produces among their highest emissions of all processes in steel production. In the “ultra-low emission standards” guidelines issued in May 2019, the central government requires that Chinese mills cap their emissions of particulate matter, sulfur dioxide and nitrogen oxide from sintering and pelletizing at 10mg/h, 35mg/h and 50mg/h respectively. Mill sources concede that complying with such tough limits is hardly achievable without considerable investment being allocated for upgrading sintering and pelletizing facilities.

“The cash flow of our company has been tight since last year,” an official with a mill based in Central China’s Henan province admitted. “On the one hand, we have been spending heavily on environmental protection and emissions reduction while on the other hand, we have been facing (local government) restrictions to our operations as part of measures to improve air quality, and our production and sales are being affected,” told Mysteel Global.

“But there is no choice. We cannot shy away from this (investment) as it concerns our survival for the future,” he said. The central government has been adopting various strategies to encourage mills to meet its ultra-low emission standards as the country is determined to fight against pollution and improve air quality for its citizens. For example, mills whose works can meet the ultra-low emission standards are exempt from any production restrictions or suspensions of facilities introduced for air pollution control, whereas those whose performance in environmental protection are poorer may face strict and frequent restrictions, Mysteel Global understands.