Facebook Twitter LinkedIn Email Sina weibo QQ QQ Zone WeChat Copy this link
Similar to the time shortly after the 2008-2009 financial crisis, China has again been standing alone in the global steel market in 2020, absorbing the extra iron ore from the other countries, as their steel industries have slowed down with the stalling economy in the middle of the fierce battling against the COVID-19.
China, the first to be hit by the virus, the first to bring pandemic under control, or seemingly so for now, and the first to climb out of the hole dug by the infectious disease, returning to the normal track, and in achieving so, the country’s steel output grew by 1.4% on year, and its iron ore imports, as a result, grew by 9.6% on year.

China’s H1 steel market performance sent a big and nice surprise to the world’s top four miners and those non-core suppliers, rescuing them from the deep worry about where to send their iron ore when many steel producers in many countries have cut their production amid the COVID-19 attack.

The iron ore miners probably had expected 2020 to be anything but exciting and vigorous for their business. The big question mark, however, is still looming in the background: will China be able to support the global iron ore market single-handed, though it is a fact that it is the largest steelmaking country in the world and the top iron ore consumer?

And where will the iron ore prices will go and how to assess the impact of the aftermath of Vale’s dam collapse in late January 2019 on the fundamentals?

Contrast to the all the concern about supply, over April-June, the top-class iron ore miners in Australia and Brazil shipped more iron ore than the low January-March quarter with more cooperative weather and the higher automation in the iron ore operations in Australia had helped to offset the disruption of the pandemic on their production and transportation.

Vale seems to have been recovering from its catastrophic dam collapse on January 25 2019 too in the second quarter of 2020, as its on-quarter sales finally returned to a positive 5.7% gain, though it could have been better without the COVID-19, as the world’s top iron ore miner estimated that the virus had reduced its iron ore production by 3.5 million tonnes in the April-June quarter.

Another 6.3 million tonnes may be at the cost during the July-December, which has prepared the Brazilian miner to just reach the lower end of its 310-330 million tonnes of iron ore output guidance for the whole 2020 even though it has been gradually getting rid of the affection of the accident.

On top of more supplies from the overseas miners, China’s domestic iron ore concentrates output has also recovered from the erratic period of January-March, and the 332 Chinese mining companies under Mysteel’s tracking posted their concentrates production up 18.3% on quarter to about 69.9 million tonnes for the second quarter.

China’s seaborne iron ore prices, nevertheless, still surged in the second quarter despite all the added supplies, as Chinese steel mills has pushed their blast furnaces capacity utilization rates to an abnormally high level of over 90%.

This, should have been expected, as China has been again into a year of heavily relying on Beijing for economic rescue from the crisis, and the past decades of development have proven time and again that Beijing has never disappointed its citizens and industrial enterprises.

Beijing’s timely rescue measures, thus, saw China’s daily crude steel production recovering since April and it had been refreshing its record highs in May and June, averaging 3.05 million t/d for the last month of the H1, which was so phenomenal given that the rest of the world posted on-year steel output declines.

The PORTDEX 62% Fe Australia Fines index ranged Yuan 639-813/wmt FOT Qingdao, much higher than the Yuan 604-704/wmt range for the first quarter, but the upper range was short of the Yuan 867/wmt a year ago, according to Mysteel’s data, with the Yuan prices including the 13% VAT.

All of sudden, the policy-boosted steel market sentiment and domestic steel demand led to a record high monthly iron ore import volume for China with the June volume up 16.8% on month or up 35.3% on year to 101.7 million tonnes.

Despite higher import volume, the imported iron ore inventories at the 45 Chinese ports fell a new low since October 2016, hitting 106.17 million tonnes as of June 18, though the volume recovered to about 114 million tonnes by the end of July, still a rather low in the past few years.

Both the imports and dwindling port inventories suggested actual consumption of the Chinese steel mills, not speculative trading, especially the mainstream medium- to high-grade imported iron ore such as PB Fines, Newman Fines, Mac Fines and Jimblebar Fines, all of which were key components supporting up the 62% Fe iron ore pricing index, Mysteel understood from the market surveys. 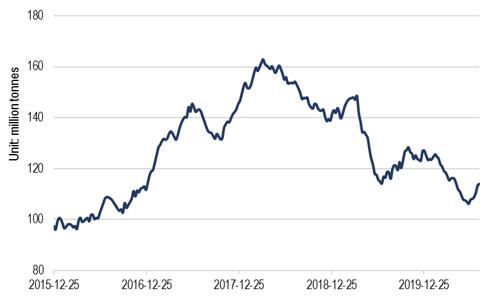 So far into the second month of the Q3, there have no signs of waning in China’s imported iron ore prices yet, instead, Mysteel’s SEADEX price surged to $120.35dmt CFR Qingdao as of August 6, refreshing its one-year high, while the PORTDEX climbed up to Yuan 924/wmt FOT Qingdao and including 13% VAT, hitting a high since November 18, 2013.

The policy-backed market optimism will always be there for the rest of this year in China, and many market sources have held onto the new hope that China’s steel demand will certainly recover fast in August from the lull in July now that East and South China have been out of the wet season.

It may be very legitimate to have such a positive view as China will aim to achieve a positive gain in its GDP growth for the whole 2020 but the country’s GDP still declined 1.6% on year for the H1 even though the second quarter posted a 3.2% gain on year, Mysteel Global understood from the domestic steel market. 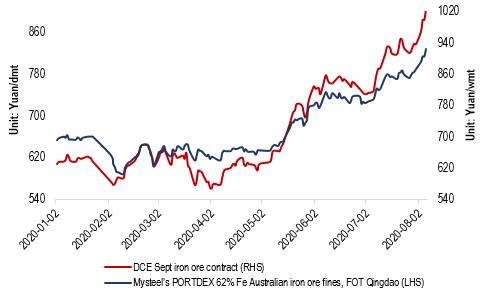 To achieve this, Beijing will invest heavily in infrastructure construction including railways, power grid, city metro services and airports, a Shanghai-based iron ore analyst, and “all of these will drive steel demand,” he added.

A Beijing-based iron ore analyst from a futures company agreed on the projection of a remaining sound steel demand and hence strong iron ore demand for the rest of the year. “As long as steel mills are still running at profits, China’s steel output will stay high,” he pointed out.

“We estimate that around 3-5 million tonnes/year of new steel capacity will be commissioned within the second half of 2020, which will only lead to more iron ore demand,” a second Shanghai-based iron ore analyst said.

Demand does not necessarily lead to higher iron ore prices, though, many market sources admitted, though it seems unlikely for the iron ore prices to fall sharply either.

“Steel prices and steel margins are the decisive factor for iron ore prices in the coming months, as iron ore supply will most probably increase from the countries such as Brazil, Canada, Ukraine and Chile, as well as China’s domestic miners,” the Shanghai-based iron ore analyst noted.

It is still too early, thus, to predict whether the iron ore prices will repeat its history in the first half by surging higher for the rest of this year amid the most probably robust steel output in China, as pandemic has been unprecedented after all and no one knows whether there will be the second or the third attacks, according to market sources.