Facebook Twitter LinkedIn Email Sina weibo QQ QQ Zone WeChat Copy this link
In late September, China’s President Xi Jinping surprised the global community by announcing a hugely ambitious plan to make the country carbon-neutral by 2060. In the three weeks since, I have received a growing number of inquiries from steel industry insiders wondering how the Chinese steel industry will adjust to the low-carbon era.

A senior official in a Beijing-based steel trading house I had approached for comment was honest in his response. “This is such a big and new topic, to be frank with you, I have no idea where it will lead the Chinese steel industry,” he replied via WeChat. 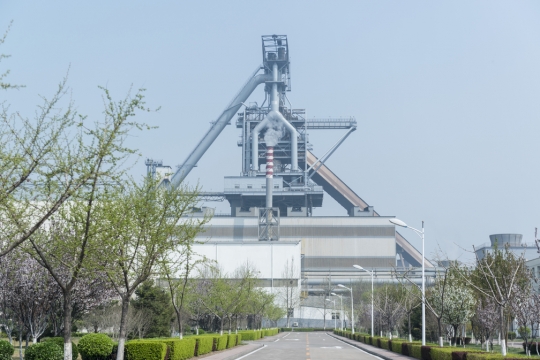 He Wenbo, executive chairman of the China Iron & Steel Association (CISA), elaborated on this very topic at a recent industrial event. “In the future, the steel industry will not face ‘relative control’ over its carbon emissions, but ‘absolute control’, as well as where to fit in China’s low-carbon economy,” he noted. “But wherever that place is, seeking a green and low-carbon course in the steel industry’s development is paramount and compulsory.”

He stated that among the few cores to guide the industry towards quality development were the continuing efforts to remove excess steelmaking capacity, the further installation of (low emission) electric arc furnaces, and stepped-up technological and innovation studies.

Recently, overseas steel mills – especially some in Europe – have been discussing and testing hydrogen as the source of energy in steelmaking as a solution to the problem of carbon emissions. “It is a beautiful vision,” a Beijing-based steel analyst frankly admitted, "but it is still far from the reality in China.”

In the post-COVID era, eco-friendly steelmaking is the core for quality development of the Chinese industry. As of now, over 200 steel mills in 22 provinces have commenced low-carbon emission rectification and upgrading, but “it will be a process that will be intensifying in steps over a long period, rather than being a short-term achievement,” CISA’s He pointed out.

The Chinese government has been publicly stating that it targets to reach the carbon dioxide emission climax by 2030 and then to realize carbon neutralization by 2060, as for the country’s steel industry, the manufacturing sector responsible for generating the most carbon emissions, the pressure is imaginable.

Other than the existing endeavours, China should nurture its own steel scrap recycling and welcome steel scrap imports, He shared his personal views with the vent participants, emphasizing, though, that all the efforts should be consciously balancing environmental protection and guaranteeing the competitiveness of steel mills. The low-carbon development should be driven by greater market forces instead of relying on government commands too, he added.

With the whole world learning how to live with COVID-19, more steel market sources – especially out of China – have started looking ahead, exploring new business opportunities in China’s steel industrial evolution, beyond simply figuring out ways to sell steel into the Chinese market.

Among the avenues being explored are ways to introduce higher recovery rates in steelmaking from Brazil, boosting DRI and HBI sales to China from South Africa, and possible scrap supplies to China in the future. Underlying such efforts is a common understanding that China will remain the core of attention in the global steel community for the foreseeable future.

In the near term, though, the outside world is still reviewing the chances for China to re-emerge as a net steel importer after June and July, but He was forthright, defining China’s net steel imports in those two months as a “temporary occurrence".

For the remainder of 2020, China’s steel exports will recover while imports will decline. This year, China’s total steel exports are estimated at 55 million tonnes, but with its large requirement of foreign raw materials and other resources products, “China is sharing its market prosperity with the world,” He commented.

China’s ongoing economic restructuring should have seen gradual declines in steel consumption, but “we are by no means under normal circumstances, so the abnormal growths in China’s steel consumption in the past three years have been understandable,” the executive chairman observed.

So far in 2020, China has occupied an even larger proportion in the world’s steel market, as its crude steel accounted for 58% of the world’s total, pig iron 68% of the total, and imported iron ore at 71% of the global trade, according to the CISA official.

He also dismissed concerns about the large volume of steel China is producing. “China’s high steel output has not been at the initiative of the Chinese steel producers themselves but has been driven by demand,” He said, noting that in the first eight months of this year, China’s steel production grew 3.7% – basically matching the 3.4% on-year growth estimated for the country’s steel consumption over the period.