The announcement, jointly issued by the Ministry of Ecology and Environment (MEE), Ministry of Commerce, National Development and Reform Commission and General Administration of Customs (GACC), stated that China will “forbid the imports of solid wastes by any means and forbid the dumping, piling and disposal of overseas solid wastes inside China”.

Wednesday’s announcement was China’s central government confirming its intention to make good on its pledge of three years ago, namely that 2021 would see China stop being a receptacle for “foreign garbage”, the epithet used at the time to describe such waste imports.

MEE, accordingly, will stop the process of reviewing and approving applications submitted by scrap processors for quotas to import solid waste materials to be placed in the “restriction” category from next year, according to the announcement. Import licenses (quota allocations) issued earlier permitting such materials to be imported within this year will expire automatically at the start of 2021, it said. 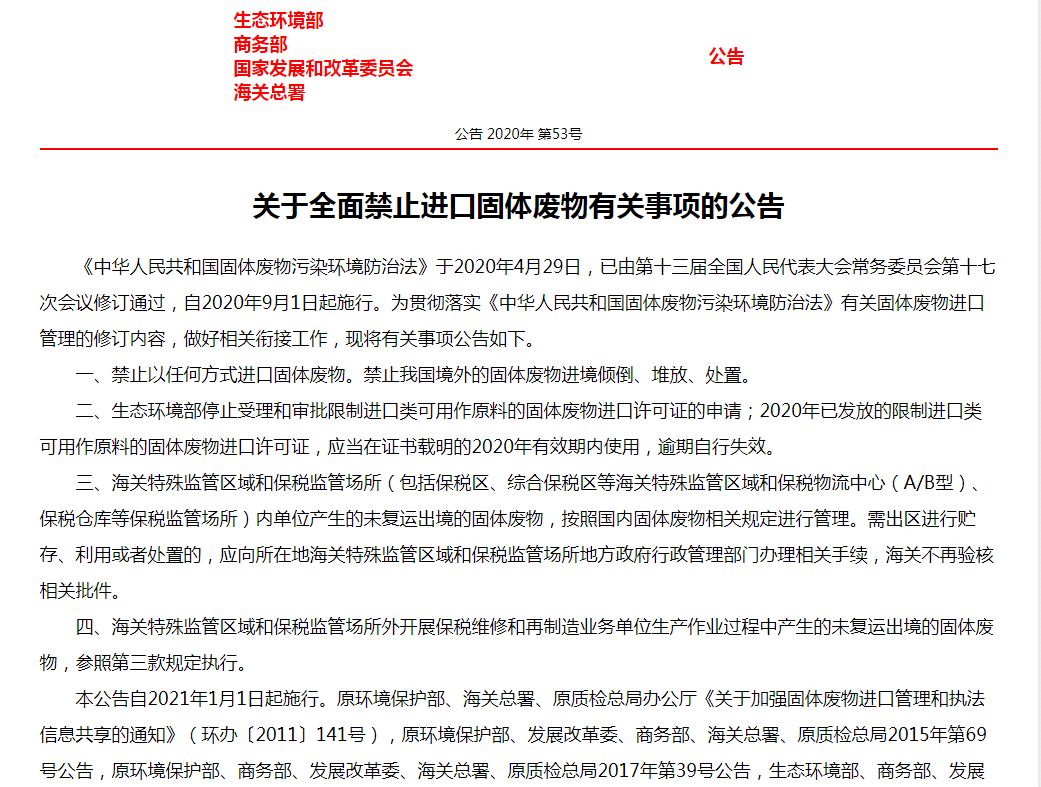 A screenshot of the November 25 announcement

Knowledgeable industry sources were not surprised at Wednesday’s announcement, pointing out that way back in 2017, China’s central government had said it would ban the import of 24 kinds of solid wastes from abroad and strive for “zero solid wastes imports” by the end of 2020.

Starting July 2019, eight types of solid waste materials including aluminum and copper scrap, and steel scrap had been categorized as “under restriction”, with their imports still allowed but under an auction and quota scheme. Tenders for quotas have been held monthly, on average, and coordinated by the MEE’s China Solid Waste and Chemicals Management, as a grace period before the complete banning, as reported.

“The announcement indicates that such imports will be completely banned from next year, but the impact will be very little because since the restrictions, imports were already very low,” commented a steel scrap dealer based in East China’s Zhejiang province.

Under the existing quota scheme, over January-September China's imports of steel scrap totalled 18,670 tonnes, equivalent to only a single day’s scrap consumption for some top-sized mills in China, the Zhejiang dealer remarked.

In 2019, the import volume reached 184,270 tonnes, which also went down substantially from the pre-restriction dates when China’s annual steel scrap imports had averaged more than 2 million tonnes, and in 2011, the total even reached 6.8 million tonnes, according to GACC’s statistics.

The issue, now, actually lies in the definition, as steel scrap has already been renamed “recyclable steel raw materials”, as a result of the China Association of Metalscrap Utilization (CAMU)’s lobbying the central government, and the association is working on new standards of the recyclable material to facilitate the governing bodies in regulating such imports in the future.

As Mysteel Global has reported, industry associations such as the China Association of Metalscrap Utilization (CAMU) have been lobbying the government, arguing that steel and metal scrap should not be categorized as waste material but, in fact, should be regarded as a valuable, high-quality and eco-friendly resource. As part of industry efforts to redefine scrap, CAMU has been working to formulate new standards.

“The Recyclable Steel Raw Material Standards that we are currently formulating will create standards of products as raw materials in terms of the type (grade), quality and environmental-protection attributes,” according to Wang Fangjie, CAMU deputy secretary general. “The standards are still under discussion, but we expect them to be issued by the end of the year,” Wang said in a post in his personal Wechat log.

The industry focus is now on steel scrap. In his blog, Wang noted that after the new standards for steel scrap are decided and agreed, an official government announcement will be issued differentiating the approved ‘to-standard’ steel waste – whose import would be permitted – from that regarded by Beijing as ‘garbage’. But as the timing of Beijing’s announcement is “still unsure,” as Wang admitted, so the present quota ‘window’ on steel scrap imports could well close temporarily.

Chinese steel scrap dealers are still closely watching progress on the new standards for steel scrap. The Zhejiang dealer expected that once steel scrap becomes free to import, “there will be no big problem for the import volume to return to the pre-2017 level.”

In a recent steel scrap conference in Haikou in South China’s Hainan province, CAMU’s vice chairman, Li Shubin, maintained that if the barriers are removed, China may be importing 1 million tonnes of steel scrap per month or around 12-15 million annually, with coming from Japan.