Facebook Twitter LinkedIn Email Sina weibo QQ QQ Zone WeChat Copy this link
Prices of the steelmaking raw materials including iron ore, coke and steel scrap have been performing strongly, soaring their respective multi-year highs in China recently, paying little attention to the stalling domestic steel prices, and this may continue in the foreseeable future too, according to Chinese market sources.
As of December 2, China’s HRB400 20mm dia rebar price showed signs of softening since November 24 after having been on an uptrend since the start of November, ebbing by Yuan 98/tonne ($15/t) from that on November 23 though up Yuan 190/t on month to Yuan 4,076/t including the VAT, according to Mysteel’s data.

A steel scrap procurement official from a top steel mill in China showed little concern on the divergence in the raw material and finished steel price movements.

“Even if the raw materials prices have been soaring, but the price difference between scrap and rebar, for example, is still around Yuan 1,200/t, a quite decent gap compared with a Yuan 600-700/t difference back in 2015, the hardest days for the Chinese steel mills, so the overall market situation has been normal, nothing to be concerned about,” he said.

“I cannot see a solution to the Chinese steel mills for now,” an official from a steel mill in North China’s Hebei province admitted, and “the steel producers will have to bear with shrinking steel margins because of the higher raw materials costs, but they will not cut down on production unless they are making deep losses,” he added.

Besides, the raw materials price strengthening has been more to do with the support from their own fundamentals, and to some extent, this has been supportive to the steel prices, as the fundamentals of longs such as rebar has not been as robust amid the remaining high production while demand retreats in the cold winter.

An official from an electric-arc-furnace plant in East China’s Zhejiang province confirmed that “although steel prices have started softening (since the start of December), we are still having the rebar margin at Yuan 150/t on average, so production cuts are not on the agenda”.

He, thus, anticipated some room for further strengthening in the steelmaking raw materials prices despite lower steel prices.

The top steel mill official shared the projection. “Up or down in prices, everyone in the value chain of steelmaking including iron ore, scrap, and coke suppliers and steel mills are all making money, that, to me, is a healthy environment, much better than in 2018 when the Chinese steel mills were the only and big winners, and this may suggest the markets to go their own ways for a while,” he added.

Steel margins at about 3% as of now are rather sustainable levels compared with the outrageously high margins at 20-30% as seen in 2018, according to him.

“China’s stimulus efforts, the all-of-sudden steel demand surge in the rest of the world in the fourth quarter of 2020 have all been contributing to the higher raw materials prices such as iron ore and scrap, as they are more globally circulated industrial goods,” he added. 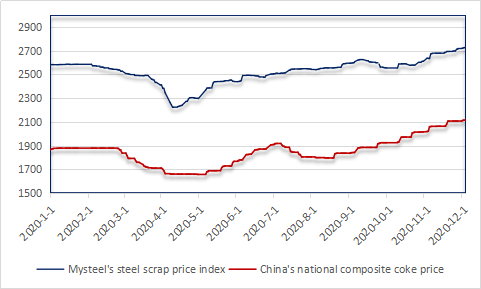 All raw material prices have solid footings in near term

In the near term, all steelmaking raw material prices are to stay resilient with their rather sound fundamentals, market sources agreed.

“The rather bullish sentiment in the steel market has encouraged us to stock up raw materials to ensure steady production in winter and during the upcoming Chinese New Year holidays,” the Zhejiang source added.

“It’s hard to see any serious fluctuations in China’s steel scrap prices,” a Shanghai-based market watcher predicted, as the seasonal supply tightness because of the growing difficulty in collection and separation of steel scrap will help to keep China’s scrap prices strong, according to him.

Besides, scrap prices have been with a rising momentum of strengthening in the global market in the past couple of weeks, which will make it very unlikely for the Chinese steel scrap prices to head downwards, the Central China steel official pointed out.

As for iron ore prices, the rises have been and will be backed up by the persistently high steel output, Chinese market source noted.

The blast furnace capacity utilization among China’s 247 sampled steel mills had been above 90% since late May, and it averaged 92.5% on November 26 despite the cold winter enveloping the northern part of China, according to Mysteel's survey, suggesting that the freezing weather may not chill the production frenzy in the near term.

As for China’s coke price, it is in the middle of the eighth price hike attempt by another Yuan 50/t after having succeeded seven rounds of price rises by the same degree, and the coke suppliers may again win the negotiation, according to a Shanghai-based analyst.

China’s coking plants are already producing as much as they can because of their high margins, so any remarkable increase in supply will be unlikely, and the ongoing removal of inefficient coking capacities and coking ovens below 4.3 m in height in North, Central and East China will only exacerbate the supply tightness, he elaborated.

As for iron ore, the market concern on stable iron ore supply is likely to prevail, according to a Shanghai-based futures analyst, when existing port stocks have been dwindling fast on the steady demand from the Chinese steel mills, he noted.

Besides, the first quarter of every year tends to see lower iron ore shipments from Brazil and Australia due to the adverse weather, Mysteel Global understands.

Besides, unlike the previous years, the better-performing hot-rolled coil (HRC) prices both in China and in the world may be taking turns with rebar to support the raw materials prices in China, another Shanghai source observed.

Unlike the softening rebar prices, the overall uptrend of Q235 4.75mm HRC price has sustained since late November, and as of December 2, the price touched Yuan 4,200/t including the 13% VAT as of December 2, or up Yuan 257/t on month, according to Mysteel’s price assessment.