Facebook Twitter LinkedIn Email Sina weibo QQ QQ Zone WeChat Copy this link
Production at steel mills, fabrication companies, mines and logistics enterprises in North China are preparing for some disruption to their business over the coming two weeks as Beijing plays host to thousands of visiting party members and officials for the year’s two most crucial political events convening this week.

Restrictions have already been announced curtailing some business activities – including in the steelmaking hub of Tangshan, just 155 kms from Beijing – and while local authorities refrained from explicitly mentioning the capital city’s hectic meeting schedule beginning Thursday, no one involved in Chinese steel missed the point.

The two meetings are usually held annually in Beijing in early March and normally, government authorities administering Beijing and nearby provinces and cities will introduce some restrictive measures such as traffic controls and restrictions on industrial and construction activities, in order to reduce air pollution and minimize the risk of major incidents that may mar the proceedings. Last year’s sessions, which were delayed until May due to the coronavirus, brought together over 2,900 NPC deputies and nearly 2,060 CPPCC members, Mysteel Global notes.

This year, particularly, ferrous market participants inside and out of China are on alert for any factor that might cause production to decline, concerned that any such announcement will add more upward pressure to the country’s already “sky high” steel prices.

“Instead of worrying about any policy changes (announced in ‘Two Sessions’ meetings) that might stir the market, I am now more fearful about production curbs in Hebei during that time,” a ferrous analyst based in East China’s Shandong province commented.

North China’s Hebei province, surrounding Beijing, is China’s top steel producing province, and mills in the region – viewed as major sources of the atmospheric pollution that frequently wafts across the capital – are always key targets for such restrictive measures, Mysteel Global notes.

Coincidentally or not, over February 23-26 five cities in Hebei comprising including Tangshan, Handan, Cangzhou, Qinhuangdao and Baoding one after another issued ‘orange’ alerts for air quality — the second highest warning level for heavy air pollution — which were naturally accompanied by stricter controls on industry sectors deemed responsible.

However, these restrictions mainly targeted the dust being kicked up at construction sites and emissions from trucks, rather than off-gases from steel-related operations, Mysteel Global noted.

For example, the local government in Tangshan, China’s top steel producing city, announced that over February 24-March 1 the number of trucks driving into factories including plants of steelmakers should decline to as low as 10% compared with prior levels. In addition, the use of trucks at local ports would be banned over February 25 to March 1, except for trucks carrying goods and materials for people’s livelihoods or for battling against the COVID pandemic, as reported.

Although the governments issuing these orange alerts made no direct reference to the Two Sessions meetings set for later this week, market sources were certain a link between the two existed.

“As we can see from the current situation, the restrictive measures in Hebei are tightening step by step. This has something to do with the convening of the Two Sessions,” an industry source based in Tangshan said candidly. “Every year around this time, such restrictions are introduced, especially in regions of poor air quality such as Tangshan and Handan,” she said. 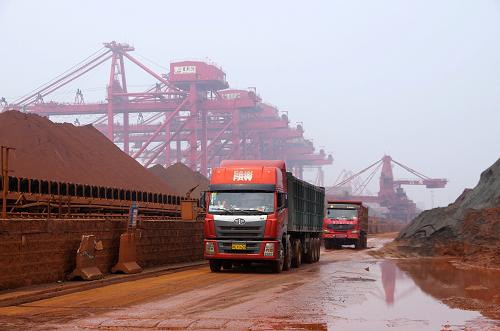 However, mill sources in Tangshan told Mysteel Global that at present, their production remains unaffected and that only transportation is being slightly impacted.

“For us integrated mills, our production has been kept stable, but if transportation continues to be restricted for a long time as now, our production will probably be reduced, since our raw materials stocks can only last for around a week,” an official from a Tangshan steelmaker said.

Mysteel’s latest survey showed that as of February 25, blast furnace capacity utilization among the 247 steel mills across China surveyed by Mysteel remained largely stable at 92.28%, or up 0.1 percentage point on week. However, one survey respondent reckoned that the overall BF rate would decrease this week should restrictions on Tangshan steel mills get tougher.

Disruptions to truck freighting are also evident in the steel scrap sector in Hebei, market sources stated. “Some traders complained that they will probably need to postpone their deliveries until after the Two Sessions, because trucks travelling from and to Beijing and nearby regions are being controlled more tightly than before,” a Beijing-based industry source noted.

“However, the real impact seems to be limited, as some scrap collectors and suppliers won’t fully return to work until early March,” she added.

Steel raw materials-producing enterprises may have even less to complain about, as no restrictions prompted by the two top political meetings have been heard so far and their operations remain stable, Mysteel Global understands.

An official with a large-sized coking coal mining company in North China’s Shanxi, bordering Hebei in the west, told Mysteel Global that the high-level meetings in Beijing may have little impact on his company’s mining operations and sales.

“I have not heard of any notifications about tougher safety restrictions yet,” he confirmed, adding that he believed that during the political events, most other coal mining operations in Shanxi would not be disrupted either. Shanxi is China’s core coking coal mining province.

Around this time in previous years, local authorities in several provinces have placed temporary restrictions on the supply and use of explosives in mining operations, to reduce the risk of serious accidents occurring during the convening of the Two Sessions that might distract from business, as Mysteel Global has reported.

An official with a large-scale iron ore mine in Hebei said their operations were as normal for now. “We have not received any directives about limiting our iron ore mining production or access to explosives during the meeting period, so our production remains as per normal,” the official said. Such limitations, if imposed, will probably be more focused on small-scale iron ore mines, according to him.

“If in the end some restrictions are imposed, we will prepare some more run-of-mine iron ore in the last several days before the meetings start to make sure that our processing operations can continue unaffected,” he added.