By November 24, China's national price of HRB400E 20mm dia rebar under Mysteel's assessment had increased for the third consecutive day to Yuan 4,793/tonne ($750/t) including the 13% VAT, or gaining Yuan 77/t from last Friday after the continuing softening since October 12, due to a few positive factors.

Among the factors are the signs of settling in the domestic steel market sentiment after over one month of price softening, the need for narrowing the spread of rebar prices in the physical and futures markets, and close follow-up of iron ore price with the rebound around the same time.

On Wednesday, the most-traded May 2022 rebar contract on the Shanghai Futures Exchange grew for the fourth working day, closing the daytime trading session at Yuan 4,239/t, or up more substantially by Yuan 408/t from the settlement price of November 18.

On the same day, Mysteel SEADEX 62% Australian Fines was assessed at $103.45/dmt CFR Qingdao, returning to the threshold of $100/dmt after having fallen below the level on November 2, or up for four working days by $16.6/dmt in total from the 1.5-year low on November 18. 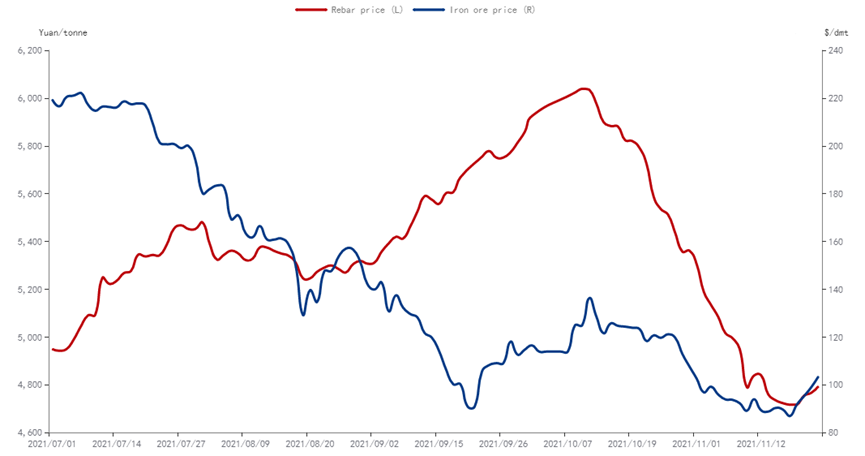 So far in November, daily trading volume of construction steel comprising rebar, wire rod and bar-in-coil among China's 237 traders under Mysteel's regular survey averaged 180,838 tonnes/day, or down 18.3% on year, just as expected, though the trading volume rebounded on Wednesday, up 33,405 t/d or 18.4% on day to 214,940 t/d, suggesting some speculative trading and needs for restocking on signs of price stability.

The latest official data on China's steel output inserted some confidence into the domestic steel market too, as amid waning demand in winter months, China's steel output had been declining on year by October, and the country's total steel output, thus, fell into a 0.7% on-year decline over January-October to 877.1 million tonnes, indicating Beijing will probably fulfil its target for less steel output for 2021 against 2020.

At the same time, some market sources are speculating on possible relaxing in the control of bank loans to the Chinese property market, and steel demand from the sector, thus, may be better than expected in the coming months, Mysteel Global noted.