Chinese steel mills in provinces where events for the ongoing Winter Olympic Games are being held are being asked to further restrict their operations in response to deteriorating air quality, according to market sources on February 9-10.

The Winter Olympics officially began on February 4 in North China's Beijing municipality, in Beijing's Yanqing district, and Zhangjiakou in Hebei province, and are scheduled to run until February 20, as reported. The orders to curb operations further were issued after regional air quality started to deteriorate from February 9, Mysteel Global noted.

In Beijing, for example, the air quality index (AQI) had declined to "moderate" since Wednesday, from "good" during the days prior, with the reading at 55 on February 9 and 73 as of the afternoon of February 10 - significantly higher than the city's AQI readings of between 30-40 over the previous days of February.

AQI ranges from 0 to 50 indicate good air quality, 50-100 indicates moderate quality, 100-150 implies unhealthy for sensitive people, above 150 means unhealthy, and above 300 means hazardous, according to the definition.

Local administrators in areas near Games venues had acted beforehand to improve air quality in their region, including many in major steel producing provinces such as North China's Hebei, Shanxi, Central China's Henan and East China's Shandong. They have imposed enhanced restrictions on steel mills since February 8, according to market sources.

The four provinces' crude steel production totaled 402 million tonnes last year, accounting for 39% of the country's total, according to the statistics of National Bureau of Statistics. 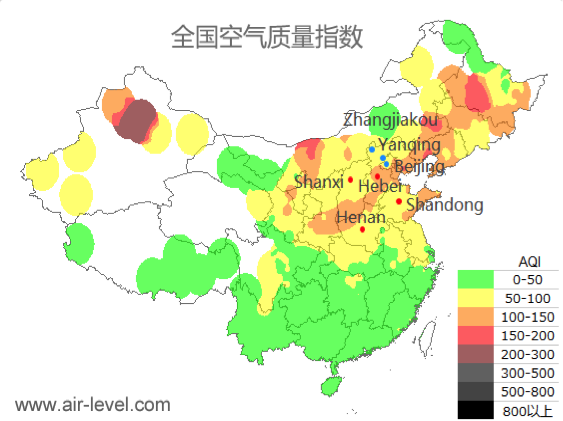 "Yesterday, (steel mills in Henan) were urgently ordered to bank all blast furnaces below 3,000 cu m for three days, in order to tackle the poor air quality during the Winter Olympics," a market source based in Henan province's Anyang city said on February 9.

In Shandong, on the other hand, mills are producing as per normal at the moment, two local mill sources said on February 10, but one source indicated that use of trucks to transport materials into the mills and bring finished steel out, is currently restricted as an air pollution reduction measure during the Olympics.

Mysteel's survey across 43 steel producers in Shandong, Shanxi and Henan in the afternoon of February 8 showed that 11 were planning to stop facilities and conduct more maintenance. The survey found that the sampled mills expect their total molten iron production to gradually fall to 284,400 tonnes/day from 330,000 t/d level on Tuesday when the survey was conducted.

In the meantime, in Hebei's Tangshan city, the country's top steel producing city, tougher restrictions have also been placed on local steel producers since February 8 as part of pollution abatement measures.

"We are now observing 50% curbs, and with some other mills, the ratio might be even higher," a Tangshan mill source said.

Mysteel's latest survey indicated that the capacity utilization rate of 126 blast furnaces in Tangshan was 57.5% as of February 6, but this is predicted to fall to below 50% due to the recent enhanced efforts.