Click here for the first part of the feature

When steelmaking raw materials transportation by water and by rail has been steadily and gradually recovering to their normal levels since early February especially in the past two weeks, iron ore transhipment from sea ports to the ports along the Yangtze River had been running as per normal now, a Shanghai-based industrial source said.

Trucking especially inter-province transportation, however, has remained an issue, as road transportation has been hit more severely by epidemic, which many highways blocked all the way until the past week or so.

To encourage more heavy-duty trucks back on road, China’s Ministry of Transportation has removed tolling fees on all the highways since February 17, requesting the provincial and regional authorities to remove the road blocks.

Some Chinese steel mills may feel the inconvenience less keenly due to their heavy reliance on rail or different locations, Mysteel Global noted.

“Most of our iron ore and coal are sent to our plant by rail, so our blast furnaces have not been seriously affected by lack of trucks,” an official from a Shanxi-based steel plant shared, though, their ferroalloys supplies, most by truck, had been disrupted and not much improvement had been detected yet, according to him.

An iron ore procurement official from a steel mill in Hebei of North China shared, though, that, their iron ore trucking “has returned to normal recently especially when many highways have reopened for traffic with no charges”.

An official from a logistics company in Tangshan, Hebei, confirmed that trucking capacity had recovered to around 70-80%, and the balance was because of short of drivers.

Meanwhile, more steel scrap has been delivered to steel mills, though the transportation by truck has remained partially constrained because of traffic control and the availability of drivers, according to an official from an EAF steelmaker in Jiangsu, East China. 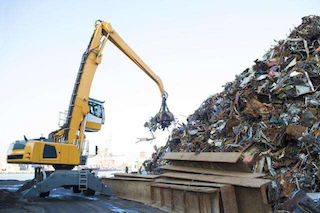 It will be too ideal a situation for Chinese steel mills to ramp up their output now that raw material supplies are no longer a constraint, as more pressing matters are still at present, as demand and steel margins have been hovering low since the restart of the steel market since mid-February.

Over February 11-20, daily crude steel output of the 97 steel mill members under the China Iron and Steel Industry Association (CISA) averaged 1.83 million tonnes/day, or 5.4% lower than that over February 1-10, according to the CISA’s release on February 25.

On February 26, only 47,142 tonnes of construction steel were sold from the 237 traders Mysteel regularly surveyed, or 70% lower from same day last year, Mysteel’s data showed.

The quiet steel market since early February, with the lengthened Chinese New Year holiday, spreading epidemic and delayed resumption date of steel consuming enterprises, has caused a series of issues for China’s steel industry, among which was cash flow, Luo Tiejun, vice president of CISA was quoted in a CISA report on February 23.

“To cope with the difficulties, steel mills may adopt measures such as reducing output and raw materials consumption, or conducting maintenance on their facilities, waiting for the steel demand to fully recover,” he suggested.

For EAF mills, it is easier to them just to overhaul their furnaces because of the low cost in doing so than to running at deeper losses than blast-furnace steel mills, Mysteel Global understands.

“We have not restarted operating yet, as steel margins are razor thin and steel scrap supply is yet abundant because of the limited availability when many steel scrap collectors and processers are still suspending their operations, and the remaining hiccups in transportation issue,” the official from the Jiangsu EAF mill shared.