Facebook Twitter LinkedIn Email Sina weibo QQ QQ Zone WeChat Copy this link
China has been injecting funding via various means such as government bonds for specific use, taxation reliefs, and subsidizing rentals and others to help support and revitalize the national economy after a stalling economy since late January for almost two months during the fight against the COVID-19.

The latest discussion took place on March 31 when China’s State Council, the country’s top governing body managing the country’s daily operations, held yet another internal meeting in Beijing, and the decision was made to grant the local authorities more quota to issue government bonds for specific use as part of the efforts to stimulate the economy that has been seriously compromised by the COVID-19 contagion.

For the first quarter of 2020, China’s local authorities had issued a total of Yuan 1.62 trillion ($228 billion) bonds, about 83.5% of the quota released by the central government, among which, the bonds for specific use amounted to Yuan 1.08 trillion yuan, or about 83.9% of the total Yuan 1.29 trillion quota granted by Beijing for this year so far, according to the latest release by the Ministry of Finance on April 2.

Chinese economy is suffering from COVID-19

As of March 31, the pandemic had infected 81,554 Chinese people and took 3,312 lives, according to National Health Commission of China statistics though the growth of new confirmed cases had stayed on the lower end of the double-digit numbers after the country locked down many cities since late January and for most of February to bring down the infection under control.

However, the cost is also very much tangible, as all the key economic data for China posted steep declines for the first two months so far.

China’s Purchasing Managers’ Index (PMI) for the manufacturing industry, for example, contracted to the record low of 35.7 in February ever since China’s National Bureau of Statistics (NBS) commenced releasing the data in January 2005, but in March, the index recovered to 52, indicating that most of the industrial enterprises have been back to operations by the end of March, as reported. 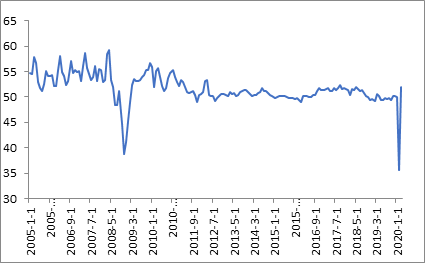 Over January-February, China’s fixed asset investment (FAI) plunged 24.5% on year as against a 5.4% year-on-year growth achieved for 2019, and that into the property market slumped 16.3% on year.

China’s auto industry, a key steel-consuming sector, at the same time, fell sharply by 42% on year to 2.24 million units as against an 8.2% year-on-year decline for the whole 2019.

The impact from the COVID-19 on China’s economy may be far from being over though many sectors seemed to have looked up in March, as China, “being a key member in the international supply chain, will be unlikely to be exempted from the shocks all economies are suffering though the COVID-19 fight seems ongoing outside China for now,” a Shanghai-based market analyst commented.

Among the sectors to rescue, medium- and small-sized enterprises, the most active parties and the greatest contributor to China’s economy, has been given special attention as many of them are running out of cash flow and on the brink of filing bankruptcy, Mysteel Global noted.

Beijing, therefore, had been issuing special funds, asking for reliefs of rentals and delaying the repayment of bank loan, so as to tide such enterprises over the storm.

For 2019, such enterprises contributed to 42.7% of the country’s foreign trade, or being the core in the BRI, but their contribution declined to 41.9% over January-February.

A Beijing-based economist, though, warned that the pace of such stimulus should be carefully measured. “We have tried hard to lower the liability ratio and if it rebounded again to a riskily high level, then much bigger trouble may be brewing,” he pointed out.