Facebook Twitter LinkedIn Email Sina weibo QQ QQ Zone WeChat Copy this link
If you find it hard to get in touch with your Japanese contacts at 9am Tokyo time though prior to the “Telework” or “working from home” practice, they would have been at the office before 8am, do not worry, they are fine, just that they are still adjusting themselves to this novel working style.

As a journalist working on the Japanese ferrous industry news for over 10 years, it has been the first time ever for me as well that, all of a sudden, I have not able to reach 70% of my usual contacts for interviews, and my calls to their phones have been transferred to the voice message or the answering machine, and that is the end of my attempt.

Even if I have been lucky to get hold of someone on their mobile phones, my questions have not been answered, as the person may not have the access from home to the company network, thus unable to share any information, just as the other day when a public relation official working for a construction contractor explained apologetically to me.

When many countries have adopted the “working from home” style easily and smoothly with the partial or complete lockdowns at their locations because of the COVID-19, and many employees have even started enjoying the new arrangement, people in Japan have been feeling more at a loss than at ease with the novel arrangement, having little clue of how to function efficiently as if they were working in the office even though they have started doing so since April 8.

On April 7, the Japanese government declared the state of emergency at Tokyo and other six prefectures and then it was expanded to all Japan stating April 16, which was supposed to be ending after the Golden Week holiday over April 29-May 6.

If not for the COVID-19, most of the Japanese workforce would not have the rare experience of working from home, and even nearly a month has passed, yet many of the Japanese employers and employees have been used to the practice.

Some of Japan’s major companies may be slightly better performed, as after all, they had been asked by the government to get ready for “Telework” long before, originally to minimize traffic jam and any disruption during the country’s hosting of the 2020 Tokyo Olympics in July, and in response, they have built such a system to enable employees to connect to company networks remotely, have distributed laptops among their employees and have trained them on confidentiality and data protection.

For many other Japanese companies, though, they are ill prepared psychologically and physically to make it work, and the reality is contrary to the comment by Japan’s Finance minister on April 22 that working from home might actually enhance productivity, as the workforce will not commute long on public transport.

The new working arrangement is also incoherent to the Japanese culture which holds great significance in face-to-face meetings before inking any deals, and a sales official from a machinery company complained that he had not been able to get a single deal concluded during the state of emergency period.

Meetings with customers have been banned, making it impossible for him to introduce himself in person and to illustrate products in full details, and “most of contracts in Japan need to be printed out and stamped by both the parties instead of being electronically signed, no new orders can be placed even if I can convince the customer into a deal,” he grumbled.

The crisis, however, may have served as a wake-up call to the Japanese working culture, after many companies have felt first-hand the necessity to evolve their business operations to be accommodating for both traditional and novel ways just for the bad days, and Japan’s steel scrap market may have become the pioneer even in its own way and in baby steps.

The state of emergency has forced the scrap market participants to accept payment by bank transfers instead of collecting and counting bank notes literally, according to a scrap distributor in Yokohama, Kageshima Kosan.

“This is the time calling for patience, caution, and perseverance and resilience, and we need to be prepared for the worst, as the real challenges may not have hit us yet,” a director from a mini-mill remarked.

The comment is very spot on, as Japan’s prime minister Shinzo Abe declared on May 4 to extend the state of emergency across Japan until end of May due to the remaining severity of the COVID-19.

“The measure has been extended, not surprised, and construction works will remain shut, manufacturers will keep operating at a slow pace, many of the people will still have been working from home, and it is hard to predict how more steeply the Japan’s economy will slip,” a steel market source commented. 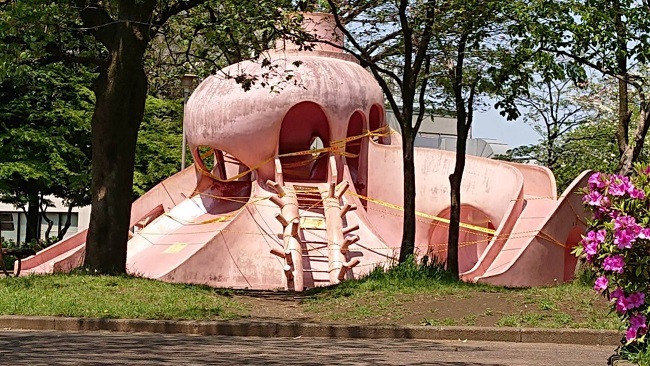 (A deserted playground in Japan)