FEATURE: Year 2020 may be just as eventful for iron ore

Facebook Twitter LinkedIn Email Sina weibo QQ QQ Zone WeChat Copy this link
After a rather exciting year in 2019 for iron ore suppliers, the market seems to have little chance for the quiet moment in 2020, but the only difference is that both demand and supply may take turns to lead the market instead of allowing supply to play a dominant role. (It will take about 5-7 minutes to finish reading the story.)
So far into 2020, despite the COVID-19 outbreak firstly in China and then worldwide by the end of March, the seaborne iron ore prices have been faring rather well even when steel mills in Europe, Japan, and India have had to reduce or halt steel production for some time starting April as well as that China’s steel output has been increasing at a far lower speed than 2019.

Will China’s demand alone support the iron ore market for the rest of 2020?

In the first quarter of 2020, the iron ore prices had been holding rather firmly, mainly due to the matching pace of declines in both demand because of the pandemic in China and the supplies from Brazil and Australia by the heavy rainfalls and cyclones.

Australia’s top three iron ore miners, unsurprisingly, all posted on-quarter declines in their output and shipments/sales in the first quarter, but the on-year increases encouraged Fortescue Metals Group (FMG) to raise its shipment target for the FY20 (July 2019-June 2020) by 2-5 million tonnes.

Rio Tinto, however, had to cut its Pilbara iron ore shipment guidance for the calendar year of 2020 because of port facilities damage caused by the Tropical Cyclone Damien in February.

Vale, the world’s top iron ore miner, however, seemed to yet fully recover from the blow of the dam collapse in late January 2019, and both its fines and pellets output and sales having slumped by about one-third. The concern on the impact of the COVID-19 also forced the company to cut its fines production guidance for 2020 by 25-30 million tonnes.

Market sources commented that high automation in Australian iron ore mining operations will probably save them from being seriously hit by the COVID-19, though it will be a different story for Vale with its operations comparatively human-intensive.

Under the dismal circumstances because of the pandemic spread in China in the first quarter, Chinese steel mills had to look out for iron ore supplies as many China’s domestic iron ore mining operations were unable to resume normal operations as planned after the Chinese New Year holiday because of the virus, and the 332 Chinese mining companies posted iron ore concentrates production over January-March fell 3.4% on year to about 59 million tonnes, according to Mysteel’s survey.

Seaborne iron ore prices, however, failed to skyrocket in the first quarter as China’s steel output growth subsided remarkably amid the battle against the pandemic across since late January. Steel demand, therefore, failed to recover energy even after the prolonged Chinese New Year (CNY) holiday over January 24-February 2, as many construction sites had been suspended and many workers were unable to return to the works until late February or early March.

The country’s logistics and transportation had been halted too, leading to the mounting of finished steel inventories at both the Chinese mills and traders.

Chinese steel mills, with around 90% of the steelmaking capacities relying on blast furnaces, had kept operating throughout all the chaos, as they could not afford to switch off their big-sized furnaces, most at 1,000 cu m and above, though they had tried the best to tame their steel output especially in March on noting the crawling pace of the steel-consuming industries to return to normal oprations.

The country’s finished steel output, in contrast, fell 1.6% on year over January-March, in sharp contrast to the 9.8% on-year growth for 2019 as it was an easy decision to make for Chinese steel mills to suspend rolling mills. 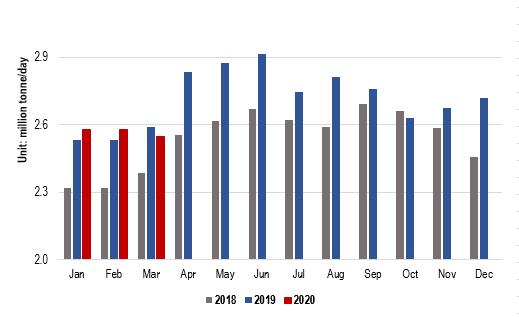 By the end of March, many countries outside China had tasted the bitterness of the COVID-19, with many adopting mobility restriction measures under different names starting late March or early April, and the impact on the global steel output had been limited, as the steel output from the 64 countries slipped only 1.4% on year to 443 million tonnes for the first quarter against the 3.4% on-year growth for 2019, mainly as China’s limited growth was insufficient to offset all the declines from the other 63 countries.

Iron ore prices resilient in Q1 thanks to China

China, the world’s top steel producing country with over 50% of the market share, nevertheless, still lent support to the seaborne and portside iron ore prices with its higher imports, and Mysteel’s SEADEX 62% Fe Australian Fines persisted at $79.9-96.3/dmt CFR Qingdao in the first quarter, even higher than $72.25-91.5/dmt a year ago, and the PORTDEX 62% Fe Australia Fines ranged Yuan 604-704/wmt FOT Qingdao and including 13% VAT against Yuan 558-689/wmt a year ago.

Besides, for some iron ore products such as Vale’s Carajas Fines and Brazilian Blend Fines (BRBF) and FMG’s Blend Fines, prices surged more than the mainstream supplies because of the limited availability.

Iron ore demand and supply may recover in Q2?

The world’s iron ore market fundamentals are expected to look up both from demand and supply in the second quarter, as both Australia and Brazil have been freed from the adverse weather and able to ship more, most probably to China, the only country that seems to have climbed out of the pandemic trap, at least for the team being.

China’s iron ore imports grew 5.4% on year to about 358.4 million tonnes over January-April, even outpacing the 1.3% on-year growth in its steel output due to the gradual recovery in China’s domestic iron ore supply and the affordability of the overseas iron ore, as steel mills in Japan and the European Union had reduced their demand substantially.

For the rest of the second quarter, Chinese steel mills may be more confident in ramping up their steel output on noting the continuing decline in the finished steel stocks at both the traders and steel mills since mid- and late March and Beijing’s economic stimulating measures one after another, injecting more funds in the traditional and new infrastructure projects.

Mysteel’ weekly survey of the blast furnace capacity utilization rate among the 247 Chinese steel mills increased to its 11-month high of about 90% by May 14, and the iron ore inventories at the 45 Chinese ports fell to a new low since late November 2016, totalling 111 million tonnes, as Chinese steel mills still preferred port inventories to seaborne cargoes amid market uncertainties. 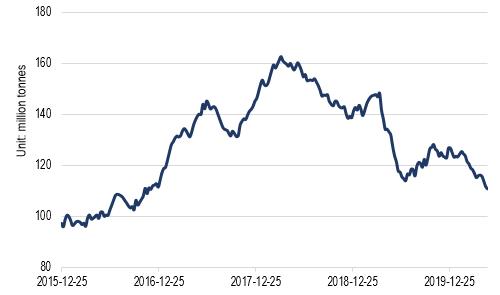 Imported iron ore prices are expected to be rangebound in general for the rest of Q2, though the resilience may be stronger for the portside prices than seaborne, just as shown over April 1-May 15 when Mysteel’s SEADEX hovered at $81.7-92.85/dmt CFR Qingdao, while the PORDEX had been strengthening since the start of April, ranging Yuan 639-698/wmt FOT Qingdao and including 13% VAT.

It is worth watching closely, though, on the impact of the rainy season in South and East China on the country’s steel consumption, and whether the reduction in the existing steel stocks will be able to outpace the increase in steel output, a manager from a steel mill in Hunan of Central China warned.

For the latter half of 2020, market sources tend to agree that iron ore supply will increase further on year, and the pace of the increment will depend on Vale.

“At the present pace, Vale will be hard to achieve its annual production guidance, unless it accelerates for the latter half of this year,” commented an iron ore analyst from an analyst with a Fujian-based futures company in Southeast China remarked.

“If Vale can produce 75-80 million tonnes of iron ore for the second quarter, and over 85 million tonnes for the last two quarters of 2020, its 2020 annual guidance will be within reach, and the supply volume to China will increase substantially,” he added, expecting iron ore shipments from Australia especially from Rio Tinto to increase on quarter too starting the second quarter of 2020.

China, mostly probably, will be the key character in the aspect of demand, but the further increase in China’s crude steel output may be limited if China’s finished steel inventories stay high and the uncertainties persist in the steel-consuming industries for the rest of the year.

The analyst, therefore, predicted the seaborne iron ore prices to range $75-93/dmt for the rest of 2020.

He did not share any price prediction, only emphasizing that “what is definite is that Beijing will spare no efforts in stimulating its economy throughout the year, rescuing the national economy from a negative growth for 2020.”