Facebook Twitter LinkedIn Email Sina weibo QQ QQ Zone WeChat Copy this link
China’s national price of HRB400 20mm dia rebar, the country’s most representative of steel market trends, hit Yuan 3,865/tonne ($555/t) including the 13% VAT on August 6, the highest so far this year. Market observers canvassed by Mysteel Global offered varied reasons for the rise, but the unanimous view was that they would see a new high before this year is finished.

Market views mixed on the factors driving the price rise

Until August 6, the rebar price as assessed by Mysteel had increased steadily for seven days in a row. Among the market sources quizzed on August 7, those located in North China generally believed that the recent rises were supported by robust buying from end-users, while those based in East and South China said that the continued increments in the price were mainly boosted by speculative buying in the futures market and that actual demand remained rather poor.

“Demand is generally good, especially for bar-in-coil, and trading of rebars is also not bad,” an official with a steel mill based in North China’s Hebei province said. “Previously, our agents were not willing to accept the products – they said there is no use taking them when end-user demand was poor under the lasting impact of COVID-19 – but recently, they’ve been eager to get the goods, booking in rather large volumes,” he continued.

However, a steel trader based in South China’s Guangdong province reckoned that the price has been driven up under “false” pretences. “Steel trading was not good. Even though the prices are up, actual trading at a such price level is low,” he said.

For North China, August may be a suitable time for construction work because the weather is fine but for South China, progress at building sites – and thus, the speed of rebar consumption – is still impeded by high temperatures, even though the rainy season ended in late July, according to him.

“There is no trading at all. It is a deadly quiet market,” a steel trader based in Shanghai commented, saying that the recent price increases were all due to the capital injection in the futures market.

“The government is tightening controls on the real estate sector, so abundant funds are flowing into the equities and futures markets, forming a bubble,” she said.

The better appetite for rebar in North China compared with South and East China is also evident in Mysteel’s daily monitor of construction steel trading. On August 6, trading of rebar, wire rod and bar-in-coil in North China increased 14.3% on week. In comparison, the trading of these products in East China only increased 5% on week and that in South China even declined, though by less than 0.1% on week. 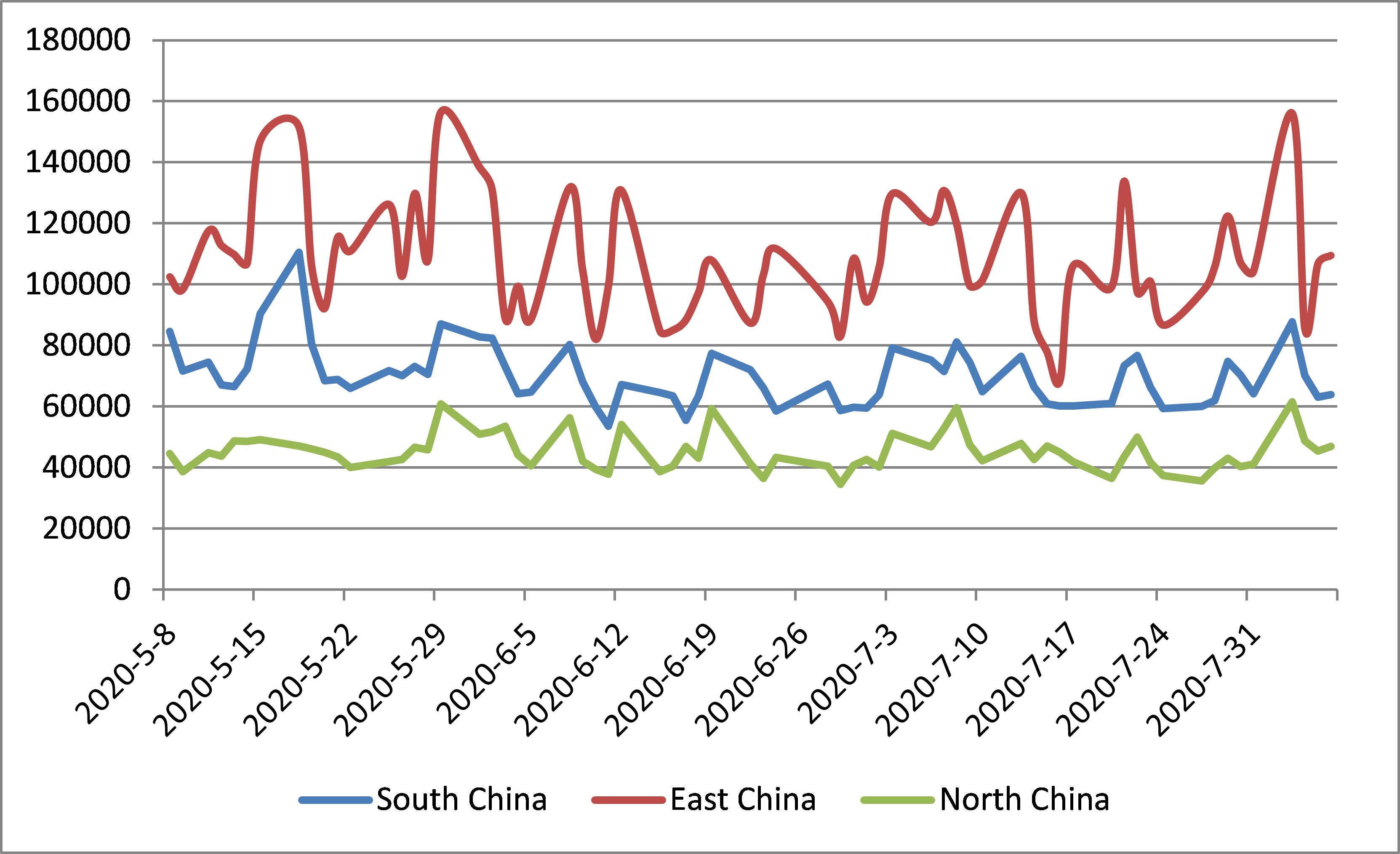 Despite the market insiders citing different reasons for the continuous rises in rebar recently, with some believing that the price level is already dangerously high, all of them agreed that new highs will be reached during the remaining months this year.

“The ‘hot’ demand season is yet come,” the Guangdong source said, referring to September and October, traditionally peak months for Chinese steel demand.  “I believe that demand will burst by then and price will increase to a higher level.”

Even the Shanghai source denied the possibility of the “bubble” being burst soon, maintaining that central government’s efforts to revamp old residential houses in the cities, as well as the construction of multi-storied above-ground parking lots, may drive up steel demand, though she said room for further price increases will be limited.