NOTE: There will be no news and data updates over January 31-February 4 due to the Chinese New Year holiday.

The macroeconomic policies of China's central government will help to safeguard the country's economic growth next year and ensure that 2022 is a year worth looking forward to, stated Chen Changsheng, director-general of the department of macroeconomic research under the State Council's Development Research Center.

"Although greater (downward) pressure might weigh on the economy in the first half (of 2022), the outlook for economic growth next year is promising," as a series of policies have been prepared to help economic growth recover to "normal" levels, Chen said on Friday, addressing participants at an online conference hosted by Mysteel highlighting industry developments in the coming year. 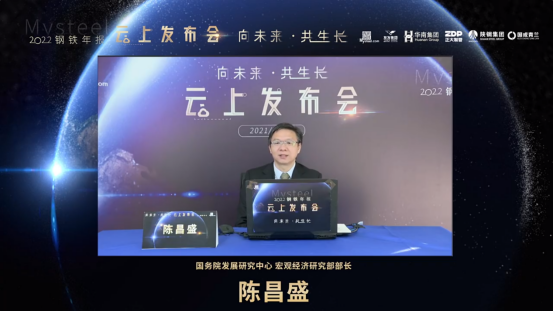 In 2022, China's macroeconomic policies will focus on counter-cyclical adjustments, as the country is facing a more complicated external environment due to the uncertainties brought about by the Omicron variant of COVIOD-19, Chen pointed out, citing global supply-chain disruptions and tighter monetary policies being pursued by major economies concerned about inflation.

During this year's July-September quarter, China's economy grew by only 4.9% up on year - much lower than both markets and policymakers themselves had expected, he candidly admitted, saying that the power crunch last quarter had negatively impacted the country's economic growth by at least 0.5 basis points.

Growth has been recovering slightly this quarter, but the improvement will only be enough to maintain 8% GDP growth for the entire 2021, a rate below the levels considered "normal" in recent years if the low base effect of 2020 is factored out, he suggested.

Therefore, more positive policies will be needed in 2022 to prevent the downward trend from accelerating, Chen acknowledged.

For the coming year, China's fiscal policy will focus on improving efficiency, he said. The government will act more proactively to support infrastructure construction, including water conservation projects and urban pipeline networks, as well as new infrastructure such as 5G stations.

"The central government will issue local government bonds for special purposes to support such projects but more rapidly and on a larger scale next year," Chen disclosed. These will include utilizing bonds planned for this year but not yet used.

Regarding monetary policy, China will concentrate its focus on domestic conditions, even though other major economies may tighten their policies, led by the US.

Next year China will be very prudent if it needs to issue any policies that might threaten to derail the economy, he said.

In his speech, Chen also mentioned that domestic bulk commodities prices may still be supported in 2022, though the growth rate may slow "evidently" from this year.

This year, prices of many industrial commodities including those used by the steel industry increased to historical highs, mainly propelled upwards by the easing of global monetary policies, mismatching of supply and demand caused by COVID-19, and higher costs springing from the low-carbon transformation taking place in many Chinese industries, Chen said.

For the next year, though the easy monetary policies might be tightened, the demand for bulk commodities will still be supported, with China's series of measures to boost the economy. Some of the measures are already in place, such as the recent cuts to bank reserve ratios and the loan prime rate, according to Chen.