The sudden surge in the number of positive COVID-19 cases being identified in China in recent weeks is further unsettling China's steel market, already being buffeted by a slower-than-usual demand recovery in spring, domestic industry sources noted on March 15.

The reemergence of the coronavirus is causing the day-to-day functioning of the domestic steel market to slow significantly, with the various restrictions and measures introduced to curb the spread of the virus disrupting freight transportation and cooling steel demand further, they observed.

"The most difficult time in the fight"

Following the outbreak of the fifth virus wave in Hongkong in February, new cases have surged in many parts of mainland China since the beginning of this month, Mysteel Global notes.

On Monday of this week, 7,701 new cases were reported across China, taking the total of existing cases - mostly found in this spike - to 249,569 as of March 14, according to data from China's National Health Commission (NHC). The number was more than the total number of COVID-19 cases reported cross the country since its first outbreak in January 2020, Mysteel Global noted. The new Omicron sub-variant, BA.2, spread so fast, Hongkong went from confirming its first case to acknowledging a full-scale outbreak in just over one month, noted Dr Zhang Wenhong, a well-known infectious diseases expert. Meanwhile in China, the number of cases "is still at the beginning stage of an exponential rise," he warned.

In a 2,000-word post on his Weibo social media account, Dr Zhang expressed his concerns about surging cases, commenting ruefully that "this is the most difficult time in the more-than-two years fight against the pandemic".

But China will still need to stick to its "dynamic zero" containment strategy in its fight against the pandemic, even though death rate (ratio of death against confirmed cases) from the new variant is very low, he suggested. "The jumps in new infections will over-stretch medical resources and lead to a temporary standstill of social life, which will cause irretrievable damage to the society and families," he said.

To achieve Beijing's "dynamic zero" result, local governments in towns and regions where new cases were found have introduced severe measures to contain the virus spread. Besides locking down areas where the risk of infection is high, the measures also include quarantining confirmed cases and their close contacts, closing shops and restaurants, tightening controls on transport services and curbing private travel.

China's steel mills are feeling the impact of such restrictions, with slower transportation being one of their major concerns, market sources indicated, though for most of them, steel production has not been affected at the moment.

An official from a steel mill based in East China's Jiangsu province told Mysteel Global that all drivers from outside the province must produce documents showing a negative Nucleic Acid Amplification Testing (NAAT) result within the previous 48-hours in order to enter local mills.

Whereas in East China's Anhui, "all trucks from areas categorized as medium or high risks areas are banned from entering at all", a scrap procurement official with a mill in the province said. Slower scrap supplies are causing him headaches as scrap stocks at his mill's yards are already low and are depleting steadily. 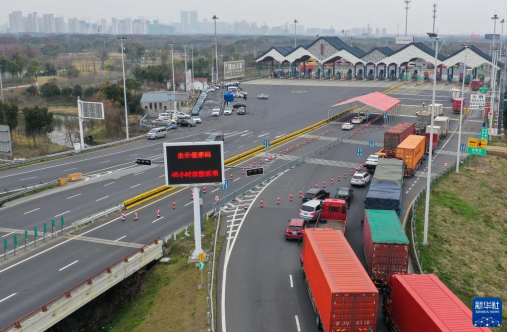 In North China's Hebei, an official from a local mill said truck transportation from major iron ore ports such as Tianjin and Huanghua had slowed markedly due to control measures. "So far, our production has not been affected, as we still have relatively sufficient supplies of raw materials. Nonetheless, we have already tried our best to adjust our iron ore transportation to ensure we can maintain production for the near-term future," he said.

An iron ore trader in Shandong also said that for now, iron ore supplies among steel mills are unaffected, as they generally have some internal stocks.

"But if the resurgence of the epidemic continues for a long time, the influence on raw materials transportation will become more obvious and could finally affect some steelmakers' operations, especially those mills in high-risk areas," he said.

However, those mills where COVID-19 cases are identified face a much greater challenge and pay a high cost in order to maintain production. In one such case involving a major steel enterprise, Mysteel Global learned that during this latest virus spike, the steelmaker's need to quarantine many employees due to positive COVID cases forced management to arrange a special charter flight to fly in replacement line workers from a distant steel works to tackle the staff shortage.

The response of the central and local governments to the outbreaks by imposing numerous restrictions on the daily lives of citizens have also impeded steel consumption, domestic steel market sources noted, when this was already lower-than-usual for a supposedly peak spring consumption season.

"Work at construction sites in Qingdao and Rizhao cities (in Shandong province) has been suspended," an official from a Shandong-based mill noted, expressing concern about his company's steel sales as orders placed to date are not sufficient for the mill to maintain normal production.

Construction sites in other regions with high infections, such as in North China's Beijing and Tianjin have also been closed, sources said.

Mysteel's surveys clearly reflected the slowdown in steel trading caused by COVID-19's renewed vigor. The survey tracking sales of construction steel – comprising rebar, wire rod and bar-in-coil – across 31 provinces, regions and municipalities showed that average sales over March 7-11 had decreased in 20 of them, compared with February 28-March 4 (See graphs below).

Another survey tracking the daily sales of hot-rolled coil (HRC) in 28 provinces, regions and municipalities showed that sales of hot coils had fallen in 19 on the same comparison.

"Many of the regions witnessing declines in steel sales are exactly where new virus cases are being reported. Actually, sales activity would have increased steadily in March were it not for COVID," a survey correspondent observed. 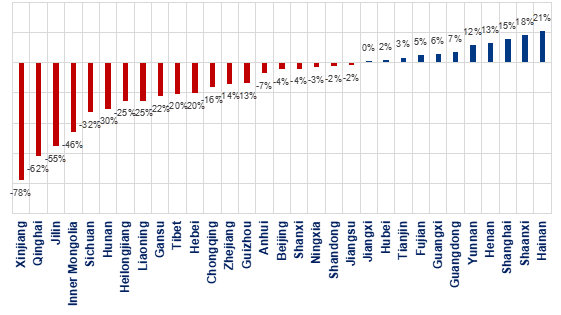 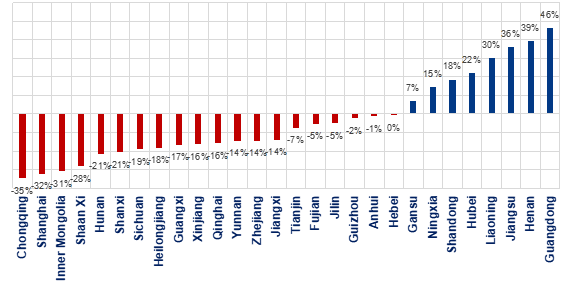 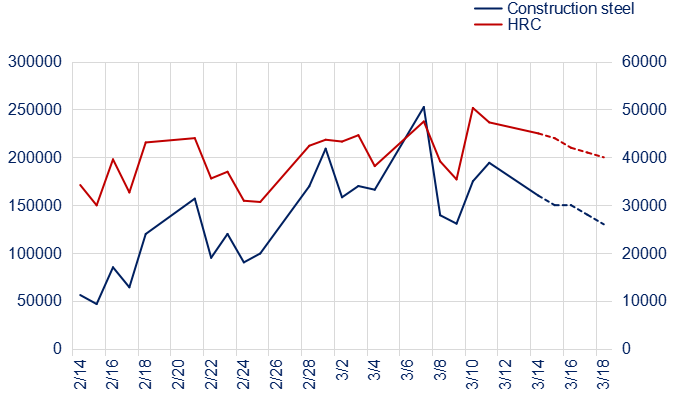 China's battle against the COVD-19 is still ongoing and the virus's impact on steel consumption is becoming more apparent. This, coupled with the decline in land leased for real estate development and starts on construction of new properties over January-February, is making China's near-term steel demand outlook gloomier, market sources reckoned.

Mysteel estimates the average daily trading volumes of construction steel and HRC for all of March will decline by 6.3% and 0.7% respectively, compared with this month's first half, to around 166,000 tonnes/day and 43,000 t/d respectively.