Jingye Group, a privately-owned rebar steel marker headquartered in North China’s Hebei province, acquired the bankrupt British Steel Limited (BSL) in November, according to a statement from British Steel on November 11, and this has marked another Chinese steel mill’s initiative to enhance its presence by exploring overseas steel investment opportunities and to extend its steel production and sales out of China for greener pasture.

BSL was incorporated in 2016 by Greybull Capital after the investor bought the long steel products European business of Tata Steel, or Corus, producing mainly construction steel, rail, special profiles and wire rod, with about 5,000 employees and about 3 million tonnes/year steel capacity. BSL entered insolvency in May and was managed by the UK government when searching for a buyer.

Jingye Group, headquartered in Shijiazhuang of North China’s Hebei province, the country’s top steelmaking province, is operating a 12 million t/y steel capacity, producing mainly rebar as well as HRC, medium plate and round bar, and it has been dealing in rebar sales in Malaysia.

This has been the second known investment case by China’s steel mills in the European steel community, as Hebei Iron & Steel, also headquartered in Shijiazhuang, took over a 2 million t/y Serbian steel mill back in 2016.

“Steel mills in Hebei, the most polluted and also the largest steelmaking province, definitely feel the pressure of survival, if not now, in the future, and overseas investment may be a valid solution and appreciated by Beijing, as China’s central government has been strongly encouraging Chinese steel mills to look for opportunities abroad,” a Beijing-based steel analyst commented.

The deal, valuing Yuan 689 million ($98 million), was still subject to the approval of related governing bodies and is expected to complete by March 2020, according to JFE.

Shaoguan Special will learn from JFE about advanced technology and experience in automotive steel production and at the same time scale up its capacity. JFE, at the same time, will solidify its footing in the Chinese steel market in general as well as further penetrate into China’s automobile steel market, according to the market sources.

If successful, this will be JFE’s second steel joint venture in China after its joint venture in Guangzhou, South China’s Guangdong province with Guangzhou Iron and Steel Enterprises Holdings, also under Baowu, in 2003 that is operating 1.8 million t/y of cold rolling and 800,000 t/y of hot-dipped galvanizing capacities targeting China’s automotive and home appliance manufacturers. 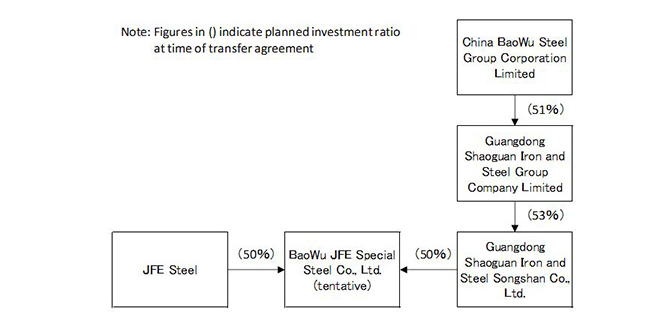 The acquisition and restructuring plan – reportedly the largest ever proposal for a Chinese privately-owned steel mill to take over a state-owned steel producer showcased the capability of privately-owned steel mills to contribute to the country’s steel industrial concentration with top ten steel producers contributing to 60% of the country’s steel output by 2020, and it also, thus, increases their chances for survival and prosperity in the years to come.

Bohai Steel Group was formed in 2010 as a new entity of four state-owned steel producers all in Tianjin including Tianjin Iron and Steel Group, Tianjin Metallurgical Group and Tianjin Tiantie Metallurgical Group and Tianjin Seamless Pipe Co with a combined 28 million t/y steel capacity. Tianjin Seamless Pipe withdrawn from the conglomerate in April 2016.

The takeover will further expand and optimize Delong’s presence in North China as it has already been operating several steelworks in Xingtai and Tangshan, North China’s Hebei province, and together with its investments in Thailand and Indonesia, Delong boasts 8 million t/y steel capacity producing both carbon and special steel.

Not only carbon steel mills are under the pressure of survival and sustainable development, special steel mills in China are no exception, which is probably why CITIC Pacific Special Steel Holdings (CITIC Special Steel), China’s top specialty steel producer, is in the process of injecting its core asset of the 12 million t/y Xingcheng Special Steel Works into its Shenzhen-listed arm in September, to turn the listed company into a 13 million t/y special steel maker.

The listed-arm, formerly known Daye Special Steel Co and headquartered at Huangshi city in Central China’s Hubei province, was renamed as an almost identical company name CITIC Pacific Special Steel Group Co, and the injection of Xingcheng was initiated in the context of Beijing’s call for greater concentration in the steel industry via mergers and acquisitions (M&As), as well as to guarantee CITIC Special Steel’s position as China’s largest specialty steel mill with the most complete and comprehensive product structure.

Once completed, CITIC Special Steel will be capable of producing 3,000 kinds of special steel items such as structure steel, tool steel, offshore engineering, and heavy-duty machinery manufacturing, according to the company.