The Year 2020 will probably never be forgotten, and the COVID-19 has brought about all sorts of changes in people’s daily life and challenges to all the countries’ economy, the steel industry in China, with no exception, had been tested its resilience, though at the same time, it had managed to stay on track in some aspects such as mergers and acquisitions (M&As) and environmental protection efforts.

China has been progressing with determination towards the goal of strengthening the concentration in its steel sector, making its top ten steel mills to contribute 60% of the domestic steel production. The aim has not been realized by the end of 2020, as targeted, but it has not been failure all in all, as China Baowu Steel Group, the country’s top steel mill with a series of mergers and acquisitions since 2016, celebrated its 2020 crude steel output exceeding 100 million tonnes on December 23, thus officially claiming the ranking of the world’s No.1 steel mill.

Along the way since 2016, Baowu was firstly formed via the merger of Baosteel Group and Wuhan Iron & Steel Group, then in June 2019, the conglomerate obtained a 51% stake in Magang (Group) Holding in Anhui, East China, and later in 2020, Baowu controlled Chongqing Iron & Steel Group in Southwest China’s Chongqing, which was followed by Baowu’s receiving a 51% controlling stake in Taiyuan Iron & Steel Group, China’s No.2 stainless producer in North China’s Shanxi province.

China’s privately-owned Jingye Group (Jingye) in North China’s Hebei province completed the acquisition of British Steel (BSL) in March 2020, adding on to the list of successful takeovers by the Chinese steelmakers of the overseas steel assets after Hebei Iron & Steel’s purchase of Serbia’s Smederevo steel plant in 2016.

The deal was signed in November 2019, including BSL’s steelworks at Scunthorpe, Skinningrove and on Teesside, and subsidiary businesses of FN Steel and TSP Engineering, and Jingye, with the organic growth, has immediately become the runner of BSL’s 4.5 million tonnes/year of steel capacity, producing mainly construction steel, rail, special profiles and wire rod.

Jingye Group, with a 12 million t/y capacity, produces mainly rebar, round bar, HRC and medium plate, and it has set foot in Malaysia’s market by selling rebar to the ASEAN country.

With the curtailment of steel capacities in China with Hebei in particular, more Chinese steel mills are expected to explore investment opportunities in Europe and the ASEAN countries, especially in Indonesia and Malaysia, be it either acquisitions or greenfield integrated steel mills.

During the second half of 2020, China’s domestic price of hot-rolled coil (HRC) exceeded rebar, which was rather phenomenal in the country, as most of the time, rebar is in the lead, being the most-consumed steel product in China.

This was not only about the better demand inside China, but also due to the widespread revivals of the manufacturing sectors out of China since around July-August when the COVID-19 had been sort of under control, and the outburst in flat steel supplies especially HRC in two or three months after the resumption triggered the surge in HRC prices worldwide.

4. China becomes a net steel importer, even just for a few months

China became a net importer of semi-finished and finished steel over June-September as well as in November of 2020, which had not been seen over a decade, as the country has been the first to successfully counter the attack of the COVID-19.

For the whole of 2020, the China Iron & Steel Association (CISA) predicted China’s steel exports to fall 15% on year while imports to surge 60% on year, and the country’s net steel export volume to slump to only 15 million tonnes from 50 million tonnes in 2019.

China’s help to cushion the blow of the pandemic on the global steel mills, thus, had been widely acknowledged, as for a long while in 2020, the country had absorbed steel supplies from many countries including those in the ASEAN region – China’s usual steel export destination.

In the context of steel output declines among most of the other countries in the world because of the COVID-19, China’s share of global crude steel output, rose to 57.5% over January-November of 2020, as against the 53.3% for the whole year of 2019, according to World Steel Association (WSA) data.

China’s crude steel production had recorded on-year growths for every month since April, and over January-November, China produced 961 million tonnes of crude steel, up 5.5% on year, while total output worldwide decreased by 1.3% on year to 1.7 billion tonnes, and the output from the other countries and regions excluding China fell 9.2% on year, according to WSA’s statistics for 64 countries and regions. 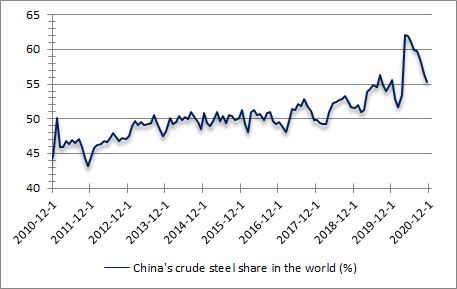 Towards the end of 2020, China’s six major integrated mills were recognized by CISA as the first batch to have met the country’s tough new ‘ultra-low’ emission standards finalized in April 2019, which have been China’s part of efforts to relieve air pollution from the steelmaking sector.

The standards cap emission levels of hazardous air pollutants such as particulate matter, sulfur dioxide and nitrogen oxide in steelmaking and set out the requirements in raw materials stock-ups and transportation.

By the end of 2020, 60% of mills in environmentally sensitive areas – namely North China’s Beijing-Tianjin-Hebei region, the Yangtze River Delta, Pearl River Delta and the Fenwei Plain – were requested to meet the ultra-low standards, and by 2025, all steelmakers in the above key areas are required to meet the standards while the other areas should have their 80% of their local steel mills to conform to the requirements.

This will be crucial for Beijing to deliver its commitment to hit the carbon emission peak by 2030 and to realize carbon neutrality by 2060, as the steel industry contributes to over 15% of China’s annual carbon emissions.

In December 2020, China’s Ministry of Industry and Information Technology (MIIT) released a draft version of the “capacity swap” scheme for the domestic steel industry, and the long-awaited document has been viewed as the new code of conduct to shape the country’s steel industry in the future.

The updated version states that the old-for-new steel capacity swap ratio for areas that are susceptible to atmospheric pollution has been raised to 1.5:1 from 1.25:1 and that in the other areas lifted to 1.25:1 from 1:1, which is to help to slim the country’s steelmaking capacity and at the same time to promote environmentally-friendly steel production and industry integration via mergers and acquisitions.

On the other hand, the ratio for more eco-friendly steel production technologies such as electric arc furnace, Corex, Finex and HIsmelt-based steelmaking instead of blast furnace-based steelmaking will remain at 1:1.

Over January-November 2020, China’s domestic auto sales totaled 22.5 million units, or down merely 2.9% on year, with the on-year decline having narrowed substantially from 42.4% annual slump in the first quarter, as the country’s automobile industry posted on-year rises in monthly sales for eight straight months since April, thanks to the strong backup of the series supportive policies from both the central and local authorities.

Among the total, the sales of new-energy vehicles (NEVs) saw the first on-year rise for 2020 in July, and the growth picked up the pace in the following months with the November result doubling from last year, and as a result, NEVs sales over the first eleven months of 2020 rose by 3.9% on year to 1.1 million units.

NEVs have benefited from China’s decision to prolonged the subsidization and the purchase-tax exemption by another two years until 2022, and some local authorities had also initiated other measures including the promotion of such car model sales in rural areas.

On the other hand, China’s domestic trucks sales increased by 23.7% on year to 4.3 million units over January-November, which was mainly due to Beijing’s decision to remove 1 million units of diesel-fueled trucks that had failed to meet National Emission Stage III standards for their exhausts from the road in some environmentally sensitive regions by the end of 2020 as part of the “Blue Sky Safeguard” plan.

By late December, China’s finished steel stocks both at the domestic mills and traders had emptied to pre-pandemic “normal” levels as the demand from the end-users had been steadily recovering since April, partially due to Beijing’s series of efforts to rescue the domestic economy from the hit by the pandemic.

Mysteel’s daily survey among the 237 trading houses across China showed that their daily trading volume of construction steel comprising rebar, wire rod and bar-in-coil averaged 199,963 tonnes/day in 2020, or up 16,211 t/d or 8.8% on year.

As of December 23, stocks of five major finished steel products at China’s 184 steel mills slipped to 4.8 million tonnes, or just higher by 5.7% on year, and the volume at the traders in the 35 Chinese cities had dropped for eleven straight weeks to 8.3 million tonnes as of December 24, or up just 7.2% on year. 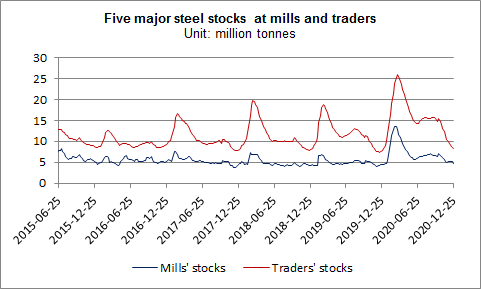 For 2020, the pandemic-struck year, better demand from domestic end-users and the pressure from the higher raw material costs had been only been part of the reason, and the other part lied in the exceptionally robust steel demand in the overseas market and the price surges worldwide including steel, scrap, and iron ore.

For December alone, for example, China’s export price of SS400 4.75mm HRC had surged by $111/t from late November to $680/t FOB in North China’s Tianjin port, according to Mysteel’s assessment, while the HRC prices in the U.S. were reported to have exceeded $1,000/t.