Facebook Twitter LinkedIn Email Sina weibo QQ QQ Zone WeChat Copy this link
Despite the news one after another from the overseas miners including ferrous and nonferrous regarding their operations disruptions amid the outbreak of the COVID-19, China’s iron ore arrivals have so far not felt any material impact, market sources confirmed over the past three days.
Iron ore shipments and arrivals have been as per normal so far

“We have iron ore long-term contracts with major iron ore miners in both Australia and Brazil, and so far we have not been notified of any disruption of shipments, and everything has been as per normal,” an iron ore procurement official from a steelmaker in North China’s Hebei province remarked.

Meanwhile, no emergency measures have been adopted at the Chinese ports regarding iron ore arrivals and unloading because of the rapid pandemic spread globally other than in China, he added.

An official from the Qingdao port in East China’s Shandong province, a top imported iron ore terminal in China, confirmed normal operations at the port including iron ore unloading.

The world’s top iron ore miner Vale informed on March 20 local time that two of its employees have been confirmed infected with COVID-19 at its mining operations in Minas Gerais and Rio de Janeiro, Southeast Brazil, though it did not mention any impact on either its iron ore production and shipment.

“So far, Vale’s shipment to us have not been affected by the coronavirus, any lower tonnage in March so far was because of the heavy rain,” an iron ore procurement manager from a steel mill in Shandong, East China, said.

On March 23 local time, Brazil-headquartered Vale announced to temporarily suspend its iron ore blending and shipment services from its distribution center at the Teluk Rubiah Maritime Terminal, Malaysia starting March 24 until at least March 31, but vessels will be redirected and redistributed among its blending facilities in China with no expected impact on production and sales volume in 2020.

As for Australia, despite that the country has adopted the lockdown measure, shutting down pubs, clubs, gyms and houses of worship starting March 23, iron ore exports have been ongoing.

“For now, I have not received any news of disruption in the operations among the major iron ore miners in Western Australia’s Pilbara including their iron ore shipping operations at ports,” an Australia-based iron ore trader told Mysteel Global, adding, “after all, these miners’ operations especially logistics are highly automated.”

A Singapore-based freight market analyst confirmed that not much delay in iron ore shipments from Australia and Brazil has been circulated in the market.

“I have heard that Australia has imposed 14-day quarantine on the crew members of ships from the virus-hit countries… but it is only applied to the crew members, not on any particular cargoes,” he said, noting that so far in 2020 Australian shipping delays have been more subjected to weather-related factors such as cyclones in February.

The analyst warned, though, that it is still too early to predict whether iron ore shipments from Brazil or Australia will be operating unaffected, as “things are still unfolding”.

Besides, the disruption to the global trade has already seen a decline in the demand for container carriers, though dry bulk vessels have so far been unaffected, a second Singapore analyst said.

As of March 23, there had been totally 332,930 confirmed COVID-19 cases worldwide, with 40,788 newly confirmed cases, according to the latest situation report from World Health Organization (WHO). Among the total, Australia had 1,396 confirmed cases, and Brazil had 904. 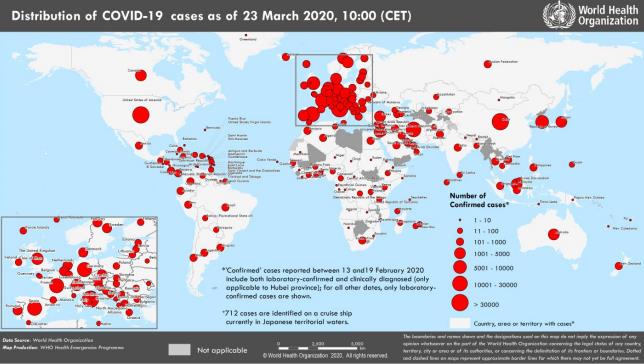 Demand and supply have been largely steady so far

Other than the two confirmed case from Vale and the halt of its distribution center in Malaysia, the world’s top three major iron ore miners in Australia including Rio Tinto, BHP and FMG had not released any releases regarding confirmed COVID-19 cases or iron ore operations disruption by pandemic as of March 23, though they have asked their employees to adhere to various country’s curbing measures and to work from home.

Vale, for example, has requested all its Singapore office employees to work from home on the strong advice of the Singapore government, Mysteel Global understands.

As for China, the first country that experienced the full blow of the virus in late January, has been progressing with resuming normal working orders starting late February, and so far most of the construction sites and industrial enterprises have been back to normality.

As of March 23, China’s confirmed COVID-19 cases added up to 81,171, with 4,735 patients still hospitalized, and 78 new cases confirmed among which 74 were imported, according to the latest update from China’s National Health Commission.

China’s steel and iron ore consumption, therefore, is returning to vitality as the domestic steel mills have been ramping up their steel output, as over 90% of the country’s steel output is consumed domestically, and the rapid spread of the virus outside China, thus, has not shown any tangible impact on the steel sector.

Finished steel stocks at both the traders and steel mill across China, thus, had declined on week by March 19, indicating the continuing improvement in the domestic steel consumption, and the daily trading volume of imported iron ore port inventories among the 52 surveyed ore traders averaged 1.65 million tonnes/day over March 16-20, up further from the 1.49 million t/d on average for the previous week, or back to a similar level before the Chinese New Year holiday, according to Mysteel’s surveys.

The iron ore price, however, with its physical and financial characteristics, has been rather volatile since China ended the prolonged CNY holiday on February 3, and Mysteel’s SEADEX 62% Fe Australian iron ore fines index fluctuated at $79.9-91.65/dmt over February 3-March 23, with the daily decline for March 23 being a substantial $6.55/dmt on the growing market concern on global economy amid the worsening COVID-19 situation.

It is a big question mark, though, with machinery exports accounting for 60% of China’s total export value in 2019, what impact will be imposed on China’s economy and the steel sector for the rest of 2020 with many countries take on emergency lockdown measures to curb the virus spread, and it looks like the battle will not be ending any soon, and China needs to brace itself for a possible second-round wrestling with the virus attack.