Facebook Twitter LinkedIn Email Sina weibo QQ QQ Zone WeChat Copy this link
The rather eventful 2019 for China’s iron ore market is approaching its end, and in retrospect, this year has been full of surprises both in demand and supply as well as in prices for the market participants. Mysteel Global has listed the ten major happenings in the market according to our own understanding.
1. Vale’s tailing dam collapsed in January

On January 25, a tailings dam (“Dam I”) that had been receiving disposed tailings from the Córrego do Feijão and Jangada mines until it became inactive in 2016, collapsed at Vale’s Córrego do Feijão mine, in Brumadinho, Minas Gerais of South Brazil.

The dam, as part of Vale’s Southern System, forced Vale to immediately suspend various iron ore mining and beneficiation operations after the burst, which is estimated to have affected 92.8 million tonnes/year of iron ore capacity under the world’s top iron ore miner including the estimated annual impact of the suspension of its 30 million t/y Brucutu mine, and the 11 million t/y for pellet.

Lastly in early November, Vale finalized the 2019 iron ore and pellets sales guidance for 2019 at a narrower range of 307-312 million tonnes when most of the dust settled and it was more certain of the overall affection of the dam accident. For 2018, Vale produced about 385 million tonnes of iron ore and sold 366 million tonnes.

In the latest quarterly report, Vale disclosed that its iron ore and pellet sales totaled 224 million tonnes over January-September, down 16.9% on year as against the 20% year-on-year decline over January-March, as the affection has been easing quarter by quarter thanks to its stocks at the mines, the ports in Brazil as well as at the blending and distribution centres in China and Malaysia.

In the second quarter its iron ore and pellet sales reversed up 4.5% on quarter and later on in the third quarter, the sales increased more by 20.2% on quarter. 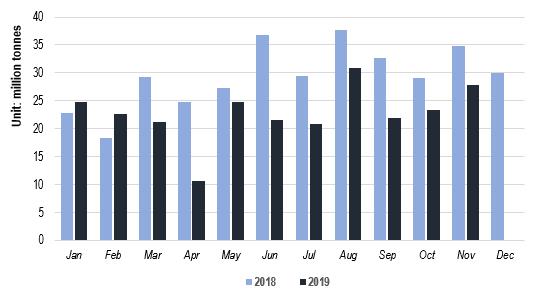 The severe Tropical Cyclone Veronica hit the central Pilbara coast between Port Dampier and Port Hedland over a weekend in late March, and the Pilbara Port Authority advised miners to begin cyclone preparations across Port Ashburton, Port Dampier and Port Hedland starting March 21 with all the loading operations ceased March 22 until around March 26.

Port Hedland - the core dispatch port in Pilbara for BHP, Fortescue Metals Group (FMG), Atlas Iron and Mineral Resources, for example, posted a 7% month-on-month decline in iron ore shipments worldwide in March because of the disruption.

Australia’s top three iron ore miners - Rio Tinto, BHP and FMG – all trimmed their iron ore production or shipment guidance for their calendar year or financial year as a result and their iron ore shipments over January-March all declined on year, with Rio Tinto’s down 14% on year, BHP down 7% on year, and FMG down 1% on year.

The supply disruption in the global iron ore market especially with lower shipping volumes from all the four leading iron ore miners to worldwide and to China surged the pricing index for the seaborne 62% Australian iron ore fines hit its nearly 5.5-year high of $127.15/dmt on July 3, CFR Qingdao, East China’s Shandong province, up $54.65/dmt or 75.4% from the end of 2018.

Less supply from the global miners has been partially made up with China’s higher output from the domestic iron ore miners and port inventories on the boost of the rise in the Yuan-priced iron ore, as Mysteel’s pricing index for the portside 62% Australian iron ore fines in China also shot up to its 5.5-year high of Yuan 913/wmt on July 2, FOT Qingdao and including 13% VAT, up Yuan 357/wmt or 64.2% from the end of 2018.

The persistent concern on supply and the uncertainties on Vale’s resumption of the affected iron ore mining operations, together with China’s higher steel output in 2019, saw the seaborne iron ore prices surging all the way until July 2019. 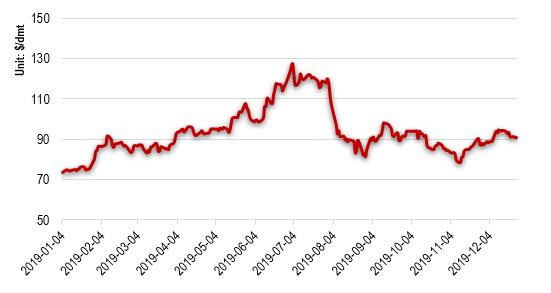 Iron ore price rises and its persistence at above $85/t CFR Qingdao most of 2019 also led to the substantial growths in non-mainstream iron ore supplies to the global market and primarily to China, the world’s largest steelmaking and iron ore consuming country to compete for the limited market share vacuumed because of supply decline from Australia and Brazil.

The statistics from China’s General Administration of Customs showed that iron ore imports from countries such as India and Ukraine, and South Africa, or the tier-two supply sources, all grew.

Link to the part 2